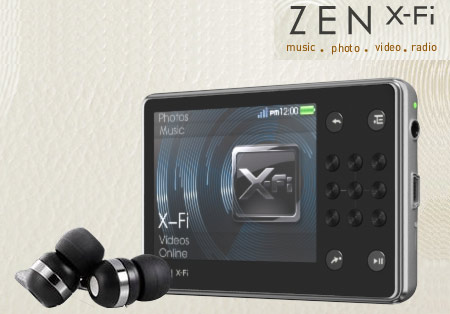 The newly announced players support MP3, WMA and unprotected iTunes music with the X-Fi Crystalizer. The EP-830 premium quality in-ear earphones are bundled with the players.

The Creative ZEN X-Fi with Wireless LAN enables users to stream and download music wirelessly and playback in X-Fi audio quality. The player can access music on home PC from any room. Besides, the player is equipped with built-in speaker, which can allow users to fill a room with music.

Not only music but users can also be in touch with friends and relatives through Creative ZEN X-Fi with Wireless LAN. Facility of free instant messaging over popular IM services including Yahoo! Messenger and Windows Live! Messenger is incorporated with the player. Users can also use personalized emotive avatars with different facial expressions and hair styles.

“We’re very excited to achieve this breakthrough of adding our X-Fi audio technology to a ZEN player, setting the highest standard in audio quality for portable music players,” said Craig McHugh, President and COO of Creative. “Some of the top recording artists in the music industry are very outspoken about the poor quality of digital music. We addressed the issue of the poor quality of digital music by inventing X-Fi technology, which restores the quality of music that is lost during the digital ripping process, and now for the first time ever we’ve been able to implement this technology in a ZEN.”