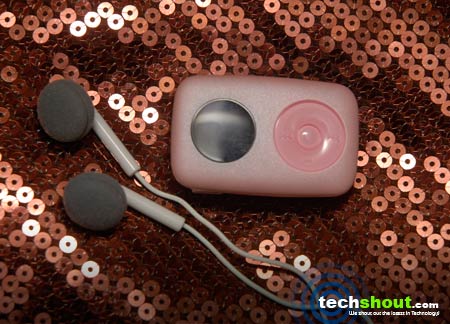 When the Creative Zen Stone Plus in pink landed on our desks for a review, we were all stirred up. Here’s our take on the diminutive player from the Zen Stone family. A walk down memory lane and we know for sure music players have evolved. From the earliest phonograph and gramophone to the cassette player and long-forgotten CD player, MP3 players have sure treaded a long path. Revolutionizing the music scenario, the players are nothing less than a constant companion, particularly if you are always on the move. Over the years, we’ve been fed with many innovative devices.

The Creative Zen Stone Plus was launched soon after the basic Zen Stone debuted in 2007. The Plus keeps to its family while also adding in a dash of additional functionality which was not found in the earlier model. This includes a 64 x 64 resolution OLED display screen, stopwatch, FM radio and voice recording. Though we can’t really say if it’s an enhancement over the Zen Stone, it appealed us at a first glance. The pink ‘effeminate’ player if we may call it so boasts of around 2GB storage capacity, and supports various file formats like MP3, WMA, Audible and WAV.

In terms of design, the Stone Plus’ ultra-small form factor certainly caught our eye. It’s inherently the same as the Zen Stone with just a few tweaks here and there. The petite MP3 player complemented by the pink color certainly looked dainty seated on our desk, though it’s surprisingly larger than its predecessor. With a center button for selection, the player’s upper chassis reveals the play/pause button. The latter button shares the space with a shortcut button and on either side is the Mic out and earphone jack. A bitsy LED on the top indicates the power status while a miniUSB port finds itself at the rear end of the player. Right next to the USB port is a reset pin hole.

The choices offered by the player’s screen are Music Player, FM tuner, FM options, Microphone, Recordings and Settings. Moving on to the player’s interface, it certainly didn’t leave a mark on us. An average interface, if we may say so, it lagged when we were browsing through the menus. Besides appearing sluggish, it also seemed to be a little too cluttered. To cancel a function we had to go right at the end of the menu and choosing the option from there without a proper back button was not something we had anticipated. Besides, transferring files to and fro from the player was not a really great experience as it adopts the USB 1.1 interface which appears more than just plain slow at around 1MB/s.

Making up for the interface though we think is the audio quality of the player. Incorporated with built-in speakers, it’s definitely much better than its older sibling and is bundled with functions like an equalizer and Bass Booster. The speakers however appear to be of no use minus the headphones, which is rather amusing. With a pretty able FM tuner, the audio reception too was decent. With up to 32 presets stored, the tuner’s auto-scan function allowed us to catch FM stations effortlessly. Some other functions that should excite music buffs include the Normal Mode, Repeat All, Repeat track, Repeat Folder, Track Once, Shuffle Repeat, Shuffle Once and Shuffle Folder.

While the Creative Zen Stone Plus comes with a separate charger, you can even charge it by connecting it to the PC via a USB cable. Weighing around 21gms, the player is around 55.6mm x 35.4mm x 12.8 mm in dimensions. An hour of charging should give you enough battery juice to last around 9 hours of music playback. In addition to this, the player is boxed with a quickstart guide, earphones, clip and a USB cable.

The player sports a sleek profile and a tough frame that should appeal users on the look for a stylish yet rugged MP3 player at an affordable price.

The inclusion of a screen over the Zen Stone was also a pleasant addition.

The sound quality of the player is pretty good and it’s also affordable for a 2GB player with decent functions.

The USB 1.1 interface certainly had us complaining every time we transferred files. The player is slow and not that great on performance.

The player’s menu too lagged considerably besides being not too user-friendly, not quite what we expected from Creative. Additionally the player also does not support the browsing of individual songs.

Though the player’s buttons have been placed well, they needed to be pushed too hard. Also the screen is actually too small leaving out quite a bit of the track information.

Though the FM tuner seemed pretty functional, we were not really satisfied with the FM reception.

On the whole, we think the Creative Zen Stone Plus is a good player and should suit the needs of audiophiles on the look for an affordable device with basic music features. If you prefer tiny MP3 players with plain music playback, then you can certainly tag this one around everywhere. Besides, it won’t even burn a hole in your pocket at just Rs. 3,699 for the 2GB version. The player scores a good 7 on a scale of 10.