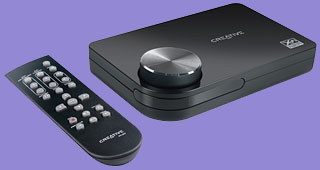 Creative launched in pride the sleek Sound Blaster X-Fi Surround 5.1, which introduces itself as the first ever USB 2.0 audio solution. The device connects easily to the USB port and delivers amazing 5.1 surround sounds.

The Creative Sound Blaster X-Fi Surround 5.1 will play music to your ears on a mobile basis by connecting it to a laptop with ease. The speakers are compatible only with Windows Vista and XP systems. The device incorporates X-Fi 24-bit Crystalizer technology which will enhance the sound effects to the optimum level. Enjoy the MP3 tunes and movies with surround sound with its X-Fi CMSS-3D which converts stereo music into surround sound.

Control the sound with a volume control knob and push-to-mute feature and if you are lazy to get off your couch then use its smart remote control which also controls the CMSS-3D and Crystalizer functions. At a price of $99 (Singapore), the Creative Sound Blaster X-Fi Surround 5.1 is all set to blast off to the stores of Singapore by the end of the month.