Amazon has got into the holiday mood with a really interesting deal concerning the Verizon-locked Motorola Droid Maxx. New customers of the said carrier can now buy the smartphone for as low as $12.49; with a two-year contract of course. But it’s still a neat bargain, considering that Verizon itself is selling the device at $199.99 with its two-year agreement.

And those who aren’t new to the carrier also have a deal to consider here. They can buy Motorola Droid Maxx through Amazon at $99.99, thus gaining a $100 saving over buying it from Verizon. Unveiled along with the Droid Ultra and Mini models earlier this year, the phone boasts of powerful battery backup which is highlighted as one of its main aspects. 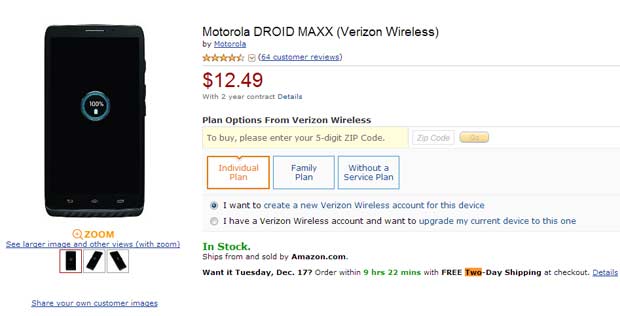 A 3500mAh power unit has been granted to the handset, providing it with up to 48 hours usage. Its body has been crafted from DuPont Kevlar fiber, whereas the touchless controls which form part of Motorola’s Moto X smartphone have been pushed onto this device as well.

The Droid Maxx carries on its front surface an HD 5.0-inch Super AMOLED display. Android 4.2 Jelly Bean is its preferred OS, and as far as its processing power is concerned, a 1.7GHz dual core processor accompanied by a 400MHz quad core GPU and 2GB worth of RAM provides it with the necessary steam for its operations. Lastly, a 10MP camera supporting 1080p video capture is present on it as well.

There’s no word as of now regarding when this Amazon offer on the Motorola Droid Maxx is slated to end, but we’d advice interested to hurry up.