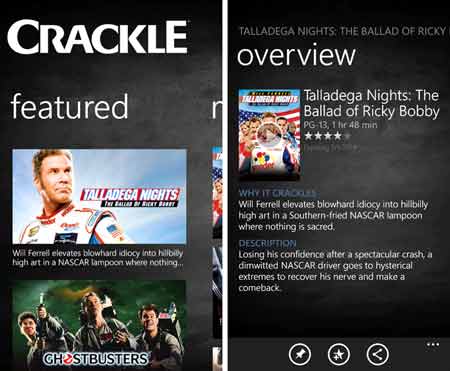 The Crackle for Windows Phone app has finally been released for Microsoft’s mobile platform. This popular video streaming application has already hogged its fair share of limelight on multiple platforms including Android, iOS, PS3, Roku, Blu-ray players and more.

WMPoweruser first spotted the tool on the mobile app store for Windows Phone devices. The reason behind the popularity of this application is that it allows subscribers to stream movies and TV shows on their mobile devices, free of charge. Pineapple Express, Panic Room, Snatch, Big Daddy, Joe Dirt and Mr. Deeds are just some of the movies that are available for streaming through the service.

Users can also revisit TV series like Seinfeld, Spider-Man, The Three Stooges and as many as 25 Anime series such as Blue Exorcist, Fist of the North Star, Viper’s Creed and many more through Crackle. Offering full length Hollywood movies for unlimited, on-demand viewing, about 20 movies and episodes of famous TV shows are added to it on a monthly basis. These belong to various genres including action, comedy, thriller and sci-fi amongst a number of others.

Furthermore, the app may be synchronized with the official Crackle website. Subscribers can build their watchlist to view their favorite movies and shows on the application and manage it through their mobile devices while on the move. The HQ quality videos can be streamed on 3G or 4G networks or via Wi-Fi.

The Crackle for Windows Phone app can now be downloaded through the Marketplace for free. It is currently available in the UK, the US, Canada and Australia.