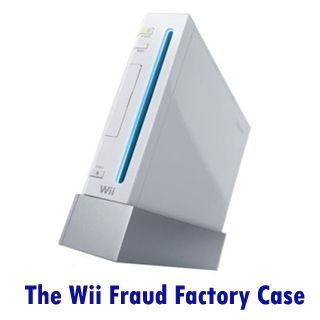 In a shocking revelation, Leicestershire’s Trading Standards Department along with support from the games industry’s own crime unit have revealed a counterfeit conspiracy which could amount to £millions. Reportedly, a Wii chipping factory has been tracked down to fraudsters in the landlocked county of Leicestershire, which is located in central England.

On the basis of the investigations carried out by TSD officers and researchers from ELSPA, trade body for the country’s major games publishers, a house in the Coalville area of Leicestershire was raided this week. Leicestershire TSD and police conducted a raid, which unveiled significant evidence which helped in concluding that the non-descript home was actually a haven of sophisticated counterfeiting apparatus, – including an industrial unit to produce rogue console chips. Over 2,000 fake chips, comprising mostly of Wii console chips although some were for Microsoft’s Xbox 360 and Sony’s PlayStation 2 consoles, were recovered from the raid. In addition, several consoles were also seized. Post the planned trial all the rogue chips will be destroyed, to avert disappointment amongst UK’s competitive children and parents. A minimum of two people have been arrested as yet for their part in the ‘fraud factory’.

A Nintendo insider mentioned, “A chipped Wii might sound cool but it is useless. The latest Wii extravaganza, seeing Mario back in a racer at the front of the pack, Mario Kart Wii, would be useless on a chipped Wii. You’ll never get the interaction or support when it all unravels. You’d have to be pretty stupid to think online gaming won’t be easily log-able in such digital days! Chip it and you brick it, as we say around the office. There is only one real Wii experience – and it doesn’t come chipped!”

People visiting the felonious website will now get to read the following words on the site: “The site is currently down for maintenance. Normal service will resume shortly, sorry for the inconvenience.”

Michael Rawlinson from ELSPA said, “Fraud can cost Internet companies a lot more than just its visitors. Our investigators are out in force working with Trading Standards Departments across the land combing everything from Sunday car-boot sales to auction websites 24/7 seeking-out counterfeiters. The message from the nation’s favourite games publishers is simple, fraudsters can run but they can no longer hide!”

John Hillier heads ELSPA’s crime unit. He stated, “Piracy costs the games industry dear – just like that of any other entertainment industry. Making good and inventive games is an expensive and creative process, with some titles today costing £20m or more to develop. To make a quality title involves teams of highly skilled professionals, from programmers and graphic artists to voice actors and musicians. When a pirate sells illegally-copied games they undermine the viability of our industry and in turn that threatens jobs.”

Paul Jackson, Director General of ELSPA continued, “We would like to thank Leicestershire’s Trading Standards Department, and Police for all their efforts during this investigation. We have now stepped up our campaign against thieves of games software and others who attempt to flout intellectual property rights of our members. We have sophisticated tracking techniques at our disposal these days and as my colleague put it, the cyber-criminals can run but they can no longer hide!”

The Nintendo Wii is touted to be UK’s most-loved family console. In fact, the Japanese console maker hasn’t been able to keep up with the UK demand for not one but two Christmas seasons. This surely proves the next-gen console’s worth.