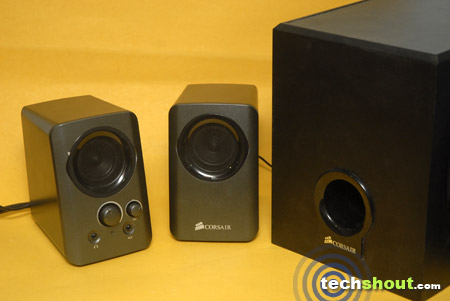 Corsair pretty much managed to surprise dedicated followers and virtually every tech enthusiast in general when it marked its entry into the gaming audio department back in September last year. The first product to emerge from those quarters was the Gaming Audio Series HS1 USB headset, which was followed up by the SP2500 and SP2200 2.1 speaker systems in early 2011. Now any self-respecting gamer will know how audio quality can make all the difference between a good and bad gaming experience. Among the two, the Corsair SP2200 2.1 speaker system has just marked its presence in India sometime back and we’ve been quick enough to get it for a review. While the SP2500 is a slightly high-power speaker system, the SP2200 fits in the mid-range both in terms of features and functionality offered.

The huge box that we had at hand gave us an idea of what we could expect from the content inside. In very bold letters there was ‘Gaming Audio series’ inscribed clearly. A warranty guide, safety manual and brief user manual trotted in to our review labs alongside the speaker. Corsair hasn’t left any space untouched as far as the cables are concerned. There’s a separate 3.5mm stereo cable that can be employed with the front AUX port, enabling easy attachment of a portable audio device. Laterally a 3.5m stereo cable has been incorporated into the right-handed satellite fashioned for the PC. An RCA/Phone cable has also been bundled in should want to hook up the system straight to a TV set, DVD player or more importantly a games console. 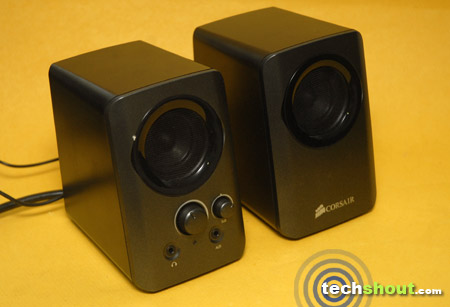 There’s no need to really mull over the importance of space in a tightly fit gaming environment. Gamers, particular crunched for gaming area are immediately going to take the minimal turf occupied by this system well. Yes, despite all of that cable jungle that walks along, Corsair sure seems to have paid attention to helping save some valuable desktop space. The satellites specifically bear a rather compact profile and they’re acoustically tuned too, ensuring elaborated audio reproduction. The subwoofer is small enough to stay on your desk or even the floor without any intrusion of space. There’s nothing out of the ordinary in terms of the system’s appearance though. We had this feeling of déjà vu with all components bearing a striking resemblance to Logitech’s 2.1 speaker system we’d reviewed a while back. And before you ask – ‘Don’t all PC speaker systems look just the same?’, you probably haven’t looked at the Razer Ferox speakers. The fact that the latter are meant to be portable is another thing altogether.

The included subwoofer has all the ports you’re going to need to have the system up and running. The DIN receptor, RCA, power input and an extra input – everything seemed to be in place. Enthusiasts are served a chipper 46W of power and what according to the company should up the ante is the 30W commitment towards the subwoofer. A true 6” powered driver is accommodated well in the side-firing subwoofer, leaving out passive or pressure drivers and making for that much needed punch which would have otherwise been missing for sure. The left satellite is plain and doesn’t bear any physical buttons; there’s just a Corsair logo along its bottom. It does nevertheless include a direct connection to the subwoofer via an RCA connector. The right satellite on the other hand functions as your main control unit for not just master and sub-volume but also Aux in and Headphone Out. The huge yet appealing DIN connector and the 3.5mm jack hang out for connection to the sub and PC respectively right from this satellite’s rear side. Both the fitted knobs need to be rotated in circular motion for audio tweaking. If only Corsair could have done away with that enthusiastically bright blue LED on its façade. 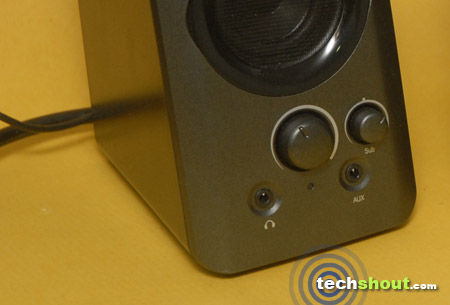 Both the satellites follow a glossy theme that runs along their back for the driver while their facial area is finished off in matte. It’s a partial silver grey shade that plays all along here. The look of the 2.1 satellites is boring and they clearly haven’t been built to titillate the senses. They’re the conventional trapezoid fabrication seen in most desktop speaker systems. While the system isn’t much of a looker, its simple fabrication does have something appealing about it. The initial clutter of wires that accompanied the speaker is almost intimidating. Contrary to our assumption, having the system connected to our PC was an effortless task. Not that we did, but looks like you can now depend on your girlfriend to have the speaker system set up all by herself as a surprise gift to you while you go shopping for the latest game in town. And not once will she call you up asking ‘Where does black or green or blue wire go?’ Jokes apart, easy connectivity means at least the beginning is good. Even the DIN was quite a move away from those nightmarish plugs we’ve seen in the past.

We sure have reason to believe Corsair when they’re telling us that the Corsair SP2200 2.1 Speaker System has been fashioned for high-performance audio gaming needs. Hard-core gamers looking at a mean and robust audio system are going to take this Corsair system well. It delivers content in the frequency range of 40Hz – 20kHz +5/-5dB, -10dB @ 35Hz. The sub did play out naturally minus any distortion at 40Hz. The 9.1” x 9.9” x 7.1” sub-woofer occasionally fell prey to the unwanted port noise, but really only at an exceptionally high volume. It wasn’t bad enough to hamper our regular gaming session or even our general music playback for that matter. Most desktop speaker users will know of how the best audio results are when the port is facing towards you (for this one, it’s mentioned on the box). The sound however didn’t appear to be affected when we did move the sub around as we fancied. 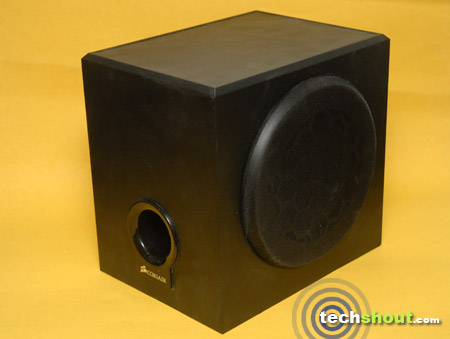 The satellites seem to have hit the right spot too with their accurate stereo imaging. The right speaker holds the leash as far as volume transitions are concerned which though aren’t truly unswerving can claim to be seamless. Irrespective of the input volume, our only grouse really was that the master amplification wasn’t that obvious as we touched the higher volume range. It didn’t take us much to realize that the 2” drivers despite their 8W power largely depend on the sub which does a commendable job of adding the much needed warmth in the mid-range along with its primary function bass. There’s no denying that the Corsair SP2200 2.1 speaker system has been fashioned for near-field use and we weren’t really surprised when the mid-range curves down on you rather fast as you move away. Stick to no more than a meter or two and you should be fine. Finally, we had our headphones plugged in and were quite taken aback by the rather harmonious transition. Not once did we face a loud in-your-face call from those involved in our Counter Strike rumpus.

Even if the Corsair SP2200 isn’t visually appealing, the overall build and construction is solid.

We were convinced about the speaker set hitting the sweet spot for gamers playing in a confined or small room.

The clear bass and overall audio clarity should get a thumbs up from audiophiles.

The 2” satellites seem too frail and distance disturbingly kills the volume at mid-ranges minus the sub.

The Corsair SP2200 has been intended at media lovers and gamers and is definitely not targeted at a home theater setting. Whether it was watching a movie or engaging in our routine session of Counter Strike, the speakers didn’t disappoint as long as we were within limited confines. Relatively, a small to medium size room is well-suited for an enhanced audio experience. The only thing that bothered us was the satellites’ treatment and response in the mid-range. The Corsair SP2200 2.1 speaker system is priced at Rs. 5,500 and it gets that one extra point for being affordable. We’re marking the system at a good 8.8 out of 10.