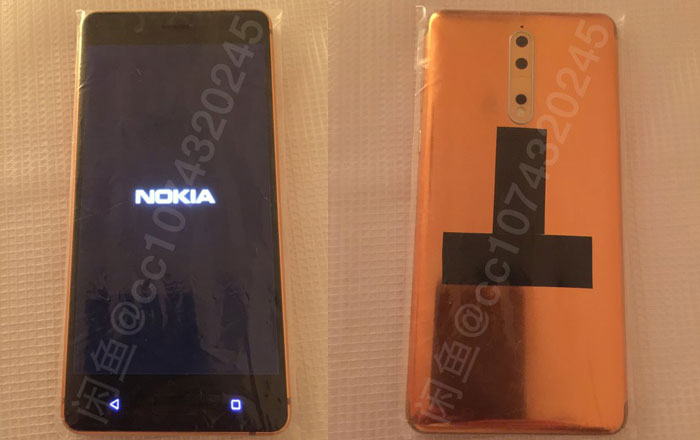 The Nokia 8’s expected launch is about 2 weeks away now and leaks about the handset are flying in thick and fast in the build up to the unveiling. The most recent one shows off 3 hands-on images of the copper gold variant of the phone and reveals some price details along the way.

To recall, the copper gold Nokia 8 had come to light a week ago, making this the second sighting of this particular variant of the device. Chinese website ITHome claims that the color in the photos is not an accurate representation of the actual shade. The smartphone is apparently much shinier in real life.

The live snaps also serve to confirm rumors of a dual-camera setup. Nokia is widely believed to be partnering up with Carl Zeiss for the handset. However, there’s no sign of the latter’s logo on the phone. It’s possible this is just a prototype and the final product will bear the distinctive Zeiss branding.

As for cost, the report claims that the Nokia 8 will be sold at CNY 4500 which translates to about $670 or Rs 42870. The same article mentions that it’ll vend for about $500 in the US which is roughly Rs 32040 in India. The exact figure is hard to pin down at this point of time, but it seems obvious the device will be a premium offering.

Other than copper gold, the Nokia 8 will probably be available in steel, blue, gold, and blue gold. It’s likely going to be announced at HMD Global’s August 16 event in London. The Nokia 2 and 3G-ready Nokia 3310 could make an appearance as well.