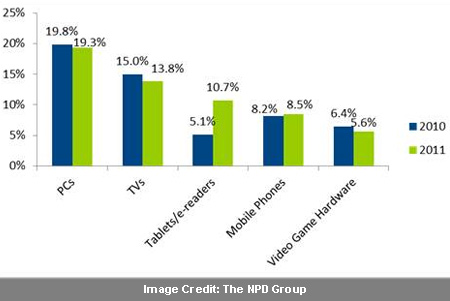 The 2011 year end witnessed electronic hardware sales hitting $144 billion in the U.S., according to a report by the NPD group. Based on figures gathered by NPD’s Retail and Consumer tracking services and Mobile Phone Track, it was found out that almost 60 percent of sales last year, leaned on the shoulders of the top five selling consumables which have been jotted down in different categories.

These groups read out to be PCs, which is inclusive of both notebooks and desktops, followed by TVs, then tablets/e-readers, mobile phones as well as video game hardware. The highest revenue was generated by PCs which marked $28 billion in sales. Although this number accounted for about 20 percent of total hardware sales, it is 3 percent down from 2010.

On the flip side, the sales of tablets/e-readers doubled in the last year with their revenue recorded at $15 billion. No prizes for guessing which company emerged as the top consumer electronics brand for 2011. Well, it was Apple indeed, taking the crown for the second year in a row. Last year, it reported a 36 percent rise over 2010. The Cupertino company was followed by Hewlett-Packard, Samsung, Sony and Dell to round up the top 5 U.S. brands list.

“U.S. hardware sales growth is becoming harder and harder to achieve at the broad industry level,” states Stephen Baker, vice president of industry analysis at NPD. “Sales outside of the top five categories fell by 8 percent in 2011 as consumers shifted spending from older technologies to a narrow range of products.”

As far as retailers are concerned, Best Buy emerged at the top again and was followed by Walmart and Apple. Amazon and Staples tied to take the fourth place. An upward trend was also reported in online, direct mail and TV shopping channel sales which accounted for 24 percent of all sales, that is 7 percent more from 2010. These non-retail channels apparently contributed to 25 percent of the industry revenue in Q4 2011.

If nothing else, the NPD report does throw light on the shift recorded in sales of consumer electronics through 2011.