Android has made its way to multiple form factors and it’s even seen as a desktop OS, but still has a very small footprint in this segment. Well, that could change if Console OS has its way. The guys over at Mobile Media Ventures, Inc. have taken to Kickstarter with a vision of bringing a fully functioning Android release for PC.

Running Google’s mobile OS on PC is possible through multiple methods, but not all of them work to the mark. Bluestacks is one of the most preferred ways to access Android applications, but the downside here is that it emulates the OS, while the Android-x86 project which runs natively lacks numerous capabilities and is buggy. Even Intel is working hard to get the OS running on its chips. Console OS will basically be a fork of Android and the developer plans to do everything by the book by licensing all necessary tech.

The platform will run natively on x86 systems and allow you to easily switch over to a Windows install. It can be installed on an internal HDD or from an external hard disk. Color OS will even support tablets and offer access to Google Play as well as support Open GL ES 3.0 and 3.1 standards for a high performance gaming experience. 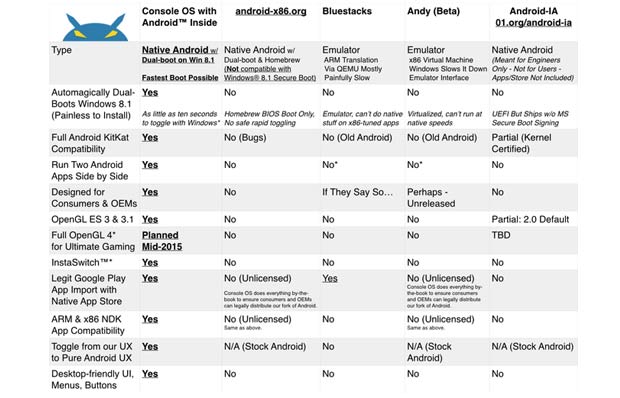 The developer has announced that 25 PCs, tablets and laptops will be supported at the start and more options will be added later. If you pledge a minimum of $5, you’ll be able to place 5 votes for which devices should get Console OS compatibility. And for $10 or higher, you’ll get the Pro version of the platform along with free upgrades for life. The software will be commercially priced at $20 a year. Head over to the Kickstarter page to back the project and for more information on the OS.