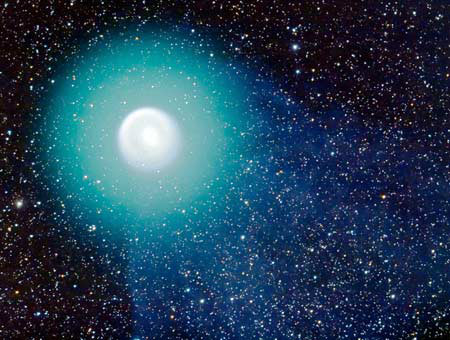 Very rarely does an event of astronomical importance and enigma occur in our solar system. Last month, Comet Holmes, which is a periodic planet in our solar system, created a buzz when it suddenly became a million times brighter than normal. In fact, according to astronomers at the University of Hawaii Institute for Astronomy, the comet has become the biggest object in the solar system, that is even bigger than the Big Daddy of our Solar System, the Sun!

Many experts in the field of physics and astronomy have come forward and tried to solve this puzzle. Hal Weaver is a comet expert at The Johns Hopkins University Applied Physics Laboratory. He explains, “Something that spectacular is almost like a supernova going off. Now, we’re trying to observe the event and figure out what the heck happened.”

The Hubble telescope is being used by Weaver and his team of astronomers to study Comet Holmes. As of now, they feel that there was some kind of explosion that shaved off a pancake-shaped slab that which disintegrated into minute dust particles, which are being lit up by the sun. In June 1999, pictures taken from the Hubble indicated that there was no dust halo and at that time the nucleus of the comet was just 2.1 miles.

Weaver also explained about the delayed effect. It seems that the volatile ice made up of carbon monoxide, dry ice, ethane, methane and acetylene and hydrogen cyanide, which was present in the comet may have got heated. However, after being heated, it could not escape Holmes’ nucleus thus causing a build-up of pressure, which in due course exploded.

Whatever be the reason, this event has surely got a lot of attention. The Comet Holmes was discovered in the 1890s but disappeared some time later only to be found after many years. This time though it seems that the comet is too big to disappear!