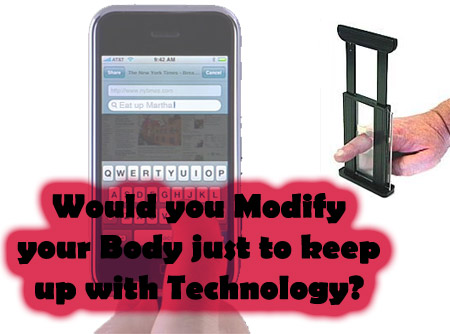 We have all heard of people modifying their body parts for some strange reason or the other. Mostly, people who do such body part modification get pleasure in mutilating their bodies! But now comes a story of a man who surgically modified his thumbs so that he could keep up with technology!

Shortly after upgrading to an iPhone, Thomas Martel from Colorado, decided that his hands were too big to handle his frequently used handheld.

“From my old Treo, to my BlackBerry, to this new iPhone, I had a hard time hitting the right buttons, and I always lost those little styluses,” said Martel.

Thus, he reportedly decided to have his thumbs surgically shrunken. The surgery which reduces one’s thumb size is called “whittling” and is a relatively new procedure.

It’s bad enough that the Apple iPhone is an expensive product on its own. Now, with Martel’s thumb-modification surgery, the total cost of owning an iPhone has more than tripled for the Colorado-based businessman.

What’s more priceless is the comment of the surgeon who performed Martel’s whittling surgery.

Dr.Robert Fox Spars, who worked on developing the procedure of whittling said, “This is really, on the edge sort of stuff. We’re turning plastic surgery from something that people use in service of vanity, to a real tool for improving workplace efficiency.”

The strangest part is that from what we have heard, one has to use his or her finger to use the iPhone’s revolutionary touch screen. Then how come Thomas Martel underwent such a surgery that would most likely benefit nobody else but handheld gamers!

When we first came across this story, we kind of passed it off as a hoax. But, then again, technology can make people do wonders only so that they can harness the goodness of such hyped up products. What’s next, Nintendo DS or Sony PSP gamers undergoing this new whittling surgery to enhance game play on their portable game systems?