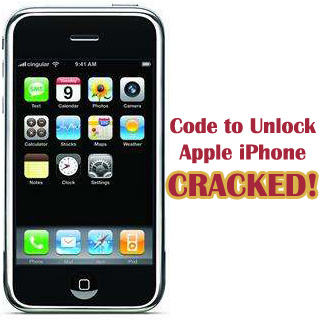 According to CNN, a group of anonymous software developers claim to be in the works of introducing a program that will completely unlock Apple’s iPhone, enabling the device to function on GSM-based wireless networks throughout the globe.

The Apple iPhone was originally developed to work exclusively on AT&T’s wireless network for the first two years, thanks to the tie up between the two companies.

On Friday evening, Los Angeles-based software consultant, Brett Schulte, who is not allied with the developers, displayed the unlocking software for CNN, thereby replacing an iPhone’s AT&T SIM card with another SIM card from T-Mobile USA. As soon as the SIM was inserted on T-Mobile’s network the device started working in around two minutes time.

“It’s completely software hacked,” Schulte maintained. “There’s no case opening required. It’s not required to do any kind of disassembly.”

What started off as merely a hobby surely turned out to be something rather breakthrough! The iPhone hack was developed by a team of six programmers from three continents, who worked to unlock the phone as just a hobby. Whilst speaking to CNN, two of the programmers John and Liu, stated that they intend to start selling the software as soon as their online payment and customer service systems was done along with the confirmations of some further details with their lawyers.

When CNN asked Liu whether he considered modifying the iPhone as a legal act, he said “That’s a very good question. I truly believe it is.”

“When people buy the iPhone it’s clear from our materials it’s designed to operate exclusively on AT&T,” Siegel noted. “When you sign up, you’re signing a two-year contract. You’re obligated to pay the bill.”