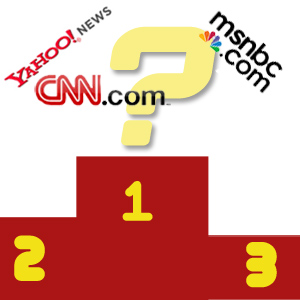 The title for the most frequently visited news site continues. Only thing is that the competition is now down to three news giants- CNN, Yahoo! News and MSNBC.

According to David Payne, senior VP and GM of CNN.com, these numbers came during what was a slow news month. He also pointed out that the Thanksgiving holiday kept a number of visitors off the site.

It must be noted that both Nielsen and ComScore count the online homes of CNN Money, Time and Sports Illustrated among the CNN numbers.

Yahoo on the other hand, seems to have broken out separately from its Sports and Finance. Yahoo received around 47 million visitors in November this year.

Further, there are some small differences between the above mentioned sites. Firstly Yahoo News is mostly an aggregator of news, and its page is also connected to a major portal who receives an average of 108 million per year.

In spite of providing a large amount of original content, MSNBC also has its headlines linked through the MSN portal, which averaged 96 million visitors last month.

Catherine Captain, VP marketing at MSNBC.com, said her company is more focused on long-term growth than monthly numbers. She said MSNBC has grown more than 10% year-over-year, according to both ComScore and Nielsen.