The HTC One has just been unveiled and as many carriers are scrambling to bring it to their customers, Clove in the UK offers information on a price, which comes to £510 including taxes. Furthermore, the carrier is getting it only in 32GB capacity and will have the unlocked, SIM-free version in both glacial silver as well as stealth black color options.

The handset on Clove will be no different than its global variant, coming with all the features that wowed the world just recently. The retailer lists it with Android 4.1.2 and Sense 5. But what the UI will bring is a neat layer of functionality in the form of BlinkFeed, a unique way to get updates and stay connected via the home screen. 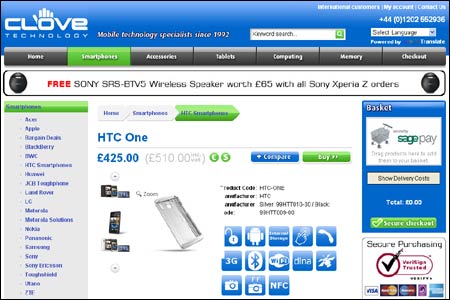 Then there’s the 1.7GHz quad core Snapdragon 600 processor and 2GB of RAM keeping the above-mentioned storage option company. A 4.7-inch Super LCD3 display will be the channel through which users stay up-to-date via an interface that draws inspiration from Microsoft’s Windows Phone 8 OS. Corning Gorilla Glass 2 protects the 1080 x 1920 pixel screen.

The handset brings along the company’s new Ultrapixel camera technology and the main snapper has auto focus, an LED flash and is based on a BSI CMOS sensor. Called a Zoe camera, it offers just 4MP in terms of resolution, but the Taiwanese manufacturer says that the quality of each pixel is considerably higher than the industry standard. On the front is a 2.1MP wide angle lens with HDR capability. Additionally, both cameras can be used to capture video in 1080p.

Connectivity options include Bluetooth 4.0 with aptX enabled and Wi-Fi, although it isn’t confirmed whether the version offered by the retailer will be 4G-ready. There is a 2,300mAh battery, but usage stats haven’t been provided. The device’s BoomSound technology with dual front speakers is just one of its other head-turning features.

A post on the official Clove blog says that it is expecting to receive the first stock on March 15, 2013. In the meantime, those interested in the One by HTC can place their orders with the retailer, although it can be confirmed (via a reply to a comment on the blog) that payment is taken immediately when the phone is booked and not when it becomes ready to ship.