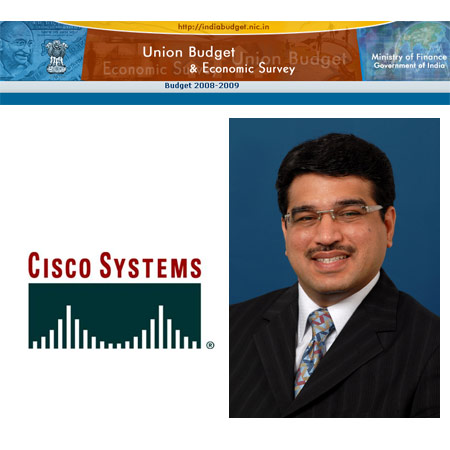 Today, the 29th day of February marks 2008 as a leap year. Though this may be a common date throughout the globe, what makes this date different in the Indian subcontinent is that today the Union Budget of India 2008-09, also termed as the general budget, has been revealed.

Every year different feelings and emotions towards the annual budget of the Republic of India, presented each year on the last working day of February by the Finance Minister of India in Parliament; are expressed. From entrepreneurs, to housewives to even vegetable vendors, everyone had their eyes glued on to the TV sets and the internet when the 2008-09 budget was announced by the current Indian Finance Minister P. Chidambaram. And of course, the tech industry too is no exception!

Expressing his views on the 2008 annual budget, Naresh Wadhwa, President & Country Manger – India and SAARC, Cisco said, “The Government has delivered a progressive budget by focusing equally on infrastructure and rural development, education, healthcare and employment generation, with proposals to help create a climate for balanced growth.”

Adding, “The vision to drive inclusiveness through technology gets a definite impetus with the proposals to set up 100,000 broadband-enabled common service centres in villages, connecting knowledge bodies and providing major universities with broadband services. Allocation of funds to accelerate power reforms and construction of roads will boost infrastructure development. The approval and fund allocation towards the state data centre scheme will help take the benefits of IT to the grassroot level.”

Wadhwa further noted that induced by the 5-year tax holiday, he anticipated improved investments in non-urban regions in healthcare from not only Indian but international players too. In addition, he also stated that the allotment towards education was also promoting.

Wadhwa continued, “On the taxation front, the reduced tax burden will be a relief to individual tax players. It would have been a boon for Indian industry had the same been applied to corporate taxes. However the exemption of customs duty on specified parts of set top boxes and certain raw materials used in the IT/ electronic hardware, as well as reduction in excise duty on Wireless hardware cards and customs duty on convergence products are a welcome measure for the ICT industry.”

Though the budget has been officially announced, all the same it has to be passed by the House before it can come into effect on April 1, which is the beginning of India’s financial year.