Chinese iPhone supporting 2 SIM Cards at Once, is Not for Sale in the US and Canada 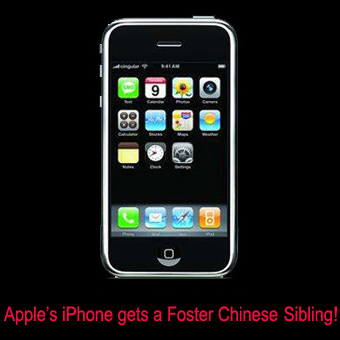 And its iPhone time again! Or is it not! Oh yes it indeed is!

Apple’s iPhone has now got a foster sibling in China. A Chinese company has developed a phone which has an uncanny resemblance with Apple’s iPod-mobile phone combo. Talk about coincidental inspiration!

The phone includes a 16:9 screen, a 3.2 inch LCD and 1.3MP camera. A 256MTF card is bundled along with an expansion slot for more storage. And as though this wasn’t enough, the Chinese phone also features a touchscreen…what a coincidence once again!

But interestingly the Chinese handset includes the ability to use 2 SIM cards simultaneously without requiring to switch the phone on and off. The phone comes pre-loaded with the “Double Dragon in Tang Dynasty” game.

The iPhone’s foster Chinese sibling is available via Light in the Box for $199.67. And yes, it’s “NOT FOR SALE” in the US and Canada. Does it really make a difference!?