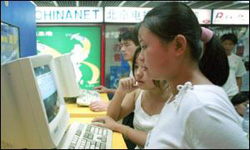 China’s lawmakers are planning to ban children below the age of 18 from going to Internet cafes thanks to the fact that these centers have become havens for online gaming and crime, reports the state press.

A draft law before the National People’s Congress, China’s parliament also sought to deal with the problem of children becoming preys to online gaming addictions, the China Daily said.

The paper stated, “Internet cafes … have become hotbeds for online gaming and chatting, and even crimes such as gambling and drug use.”

The chairman of the law committee in congress, Yang Jingyu, told parliament on Sunday that he felt that internet cafes played a “negative role” in youngsters’ development.

“If there were no internet cafes, students would be able to concentrate on their studies better,” the paper quoted him as saying.

His draft law would ban children under the age of 18 from internet cafes, while authorizing research into new technology to help fight online addictions, the paper said.

But other lawmakers said the law would be impossible to implement, and barring youngsters from using the Internet could stifle budding information technology talent.

“For teenagers older than 16, who already earn their own money, it is unreasonable to forbid them from entering Internet cafes,” parliament standing committee member Ye Rutang was quoted as saying.

China has the world’s second-biggest population of Internet users after the United States, with 123 million people online. But the government tries to regulate what Web surfers can see, barring access to material deemed subversive or obscene.

Chinese psychologists are looking into the possibility that heavy Internet users suffer a form of addiction, and a handful of clinics have opened to wean patients off compulsive internet use.