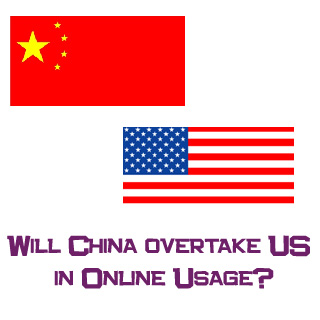 As per new statistics released by the Chinese Government, China is close to beating the United States as the country with the maximum internet users in the coming months.

According to the state-owned China Internet Network Information Center, the East Asian nation’s total number of internet users went up by 53 percent to 210 million by 2007-end. This is quite a remarkable increase as compared to the 137 million at the end of 2006 and 162 million in June 2007. The Wall Street Journal reported that as soon as China adds five million users to the existing number, it will beat US’ number and gain the distinction of being the world’s largest internet market.

However this will not be an all that easy target for China. It’s important to note here that at present China’s penetration rate is only 16 percent according to the official agency Xinhua. This was the figure that the US had already hit way back in the mid-1990s. And at present a whooping 75 percent of American adults are found to be online, notes a survey by Pew Internet and American Life Project.

Furthermore Xinhua also reports that a major population, as much one-third of the total China populace visits cybercafés to surf the internet. On the other hand a massive 93 percent of American users go online from the comforts of their homes itself.

Also China promotes usage of the internet to primarily induce peace, for business and education purposes, blocking the public from viewing material believed to be pornographic or critical of the communist rule. Contrary to all this, the US is a democracy, and quite true to its meaning indeed.

But this could perhaps not undermine China’s determination to become the biggest internet market. John Horrigan, Pew’s associate director said, “Users do a lot to shape the Internet and not only by directly posting content but (by) their behavior.” Adding, “It tells other people what the demand is. As you get more Chinese, that increases demand for Internet content in Mandarin and other Chinese languages.”

In addition, though there may be limitations of avenues, Horrigan notes that several users in China are accessing the Internet from their mobile devices, offering China “a distinct opportunity to shape the Internet” with usage far and wide.