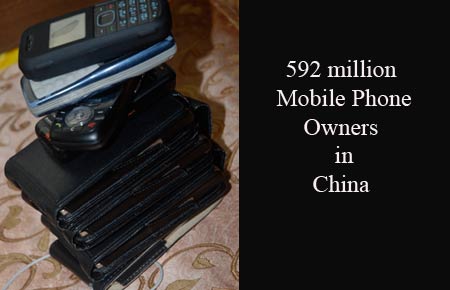 Ranking the highest in population levels, China also boasts to be on the top position in regards to Mobile Phone owners as well. Yes! That’s true that China’s mobile phone ownership has crossed the 592 million mark.

As the landline phone requirement goes down, Mobile usage soars in the Chinese markets. The Mobile Phone accounts rose by 44.8 million through the end of May and in contrast fixed-line accounts fell by 6.5 million to 358 million. The highly populated country is known to possess latest and various varieties of phones.

It was also noted that most of mobile users carried multiple phones for personal and work. This piling of mobile phones in Chinese markets has benefited the popular mobile phone carrier, China Mobile which boasts about its huge customer base which is more than 400 million. There is saying that ‘Everything in a particular limit is Good’, hope China limits its mobile phone usage or the day would be very near, where we will have a mountain of mobile phones on our lawns.