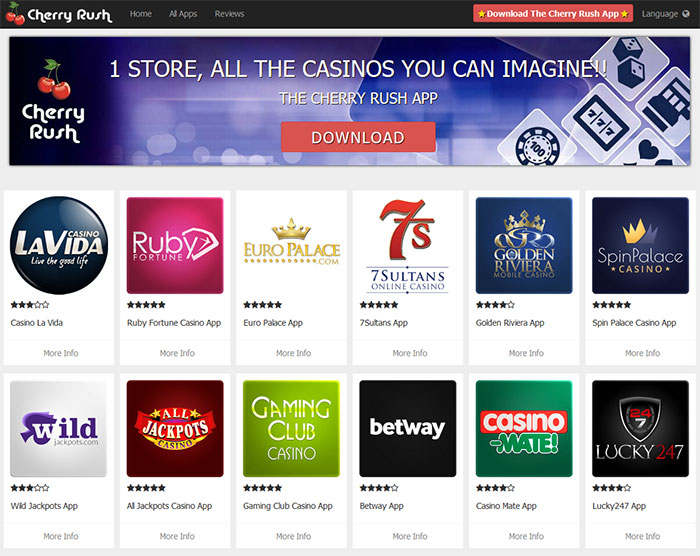 It seems truly amazing in this era when adults of all ages and sexes are playing casino games on mobiles and PCs, but real play casino apps are still not a part of the Google Play Store. It is hard to see the reasoning behind this absence and it has certainly been frustrating for Android users who want to add the best casino games to their mobile, but now CherryRush.com has arrived and is set to bring that frustration to an end.

This brand new app store is being billed as the first ever one to offer real play casino apps for Android tablets and mobiles, but in fact this actually doesn’t fully emphasise what a game-changing thing it is for casino fans. Cherry Rush is a store that features nothing but real-play Android casino apps, and this tight focus has allowed it to gather together an unrivalled selection of these apps under one roof. It is not hard to see how this could be a brilliant thing for those who like the idea of playing mobile casino but have been unsure about which of the innumerable such apps that are out there they should add to their device. After all, from finding the right games to making sure that the app is secure and compatible with your particular Android mobile, there is a lot to think about before downloading it.

Those behind Cherry Rush seem to have a real grasp of this and it has led them to make the process of finding the best casino apps for you as painless as possible. As well as listing most of the casino apps on the market, it contains reviews of every one of them written by its expert staff and detailing everything you could want to know about the games, security, payment options and compatibility. Coupled with its 1-5 star rating system, this will let you separate the wheat from the chaff when it comes to mobile casino apps. The reviews are also backed up by other useful info, from staff selections to top trending apps, so that you know which apps are popular and why. They also recognise that while some casino fans love video slots like Dragon’s Myth and Thunderstruck II, others prefer table games baccarat and blackjack – and all can be found here. The Games of the Week feature shows you the casino apps with the widest choice of games, so that get what you want. Apps are free to download from Cherry Rush, but can also be played using your browser if that is what you prefer, and the store guarantees getting you started playing quickly.

Overall Cherry Rush is something that the mobile casino market has been crying out for now for years and is the ideal way for those who want a top casino gaming experience via their Android mobile to locate the very best apps that are out there.