Cheaper Xbox 360 on its way to Japan, reveals Microsoft 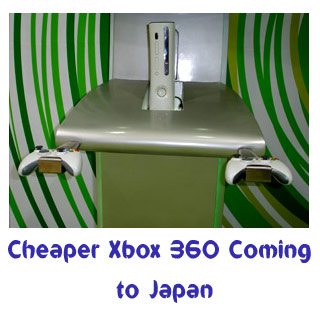 A cheaper version of the Xbox 360 is on its way in the land of the rising sun on March 6, announced Microsoft.

The new model, which is exactly the same as the Arcade SKU that was launched in the US in Fall 2008, comes with an HDMI output, a wireless controller and a 256MB memory card that replaces a hard drive.

Priced at around JPY 27,800 (USD 260), the cheaper model is around one-fifth lesser than what the cheapest Xbox 360 currently sells for in Japan.

It’s no secret that the Xbox brand has never had a dominant presence in Japan, and things went the same way even after the 360’s launch there. As per stats compiled by publisher Enterbrain, while the Wii touched a 3.6 million sales mark, PS3 enjoyed a sales figure of 1.2 million, however the Xbox 360 lagged behind by selling only 257,800 Xbox 360s in the Japanese market.

The cheaper Xbox 360 version launch move may perhaps help Microsoft to attain a grip in Japan. Well things shall get clear only post March 6 of course!

Hey, on that note, does March 6 ring a bell for something else too? I’m sure it does if you’ve been following TechShout.com regularly, since as we had reported yesterday, March 6 is also the day when the Satin Silver-colored PS3 with a Silver DualShock3 Wireless Controller will begin shipping in Japan.

So where do you plan to head on March 6? Outside the Xbox 360 store, the PS3 retailer store or perhaps the hot favorite Wii shop?