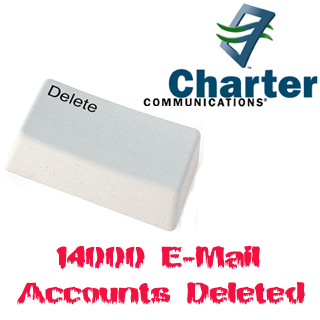 According to the execs of the US’ third-largest cable television provider Charter Communications, a software error has occurred during routine maintenance, which has resulted in the removal of the contents of 14,000 customer e-mail accounts.

What’s even worse is that the lost data, which includes messages, photos and several other attachments from inboxes and archive folders, cannot be recovered.

Anita Lamont, a spokeswoman for Charter, said “During this maintenance we erroneously deleted active accounts along with the others,” Lamont said. “It’s never happened before. They are taking steps to make sure it never happens again.”

Apparently, the company performs routine maintenance on email accounts that have not been used for over three months. Usually things go right, however this time around things seem to have got highly messed up.

According to Lamont, around Missouri customers and approx. 300 in Illinois were affected by the error. The company has a total of around 2.6 million high speed subscribers.

To fix things, all customers who have been affected will receive a $50 credit in their forthcoming bill. Charter runs Home Networking through which users can connect up to five computers in a home. The company is now recompensing its customers further by offering free installation of its home networking for one month.

In order to avoid an encore of things, Lamont stated that the St. Louis-based will alter its account deletion system. Instead of immediately deleting unused accounts during the routine maintenance rounds, under the modified policy Charter will rather take a back up of the accounts on a separate server for an unrevealed period of time before permanently deleting them.