Most people will be familiar with the adage about beauty lying in the eye of the beholder and then we’ve also heard that beauty lies in the eye of the ‘beerholder’. The underlying idea probably has something to do with the phrase ‘many people, many perspectives’. The CES 2011 brought with it a huge array of devices; some with cringe-inducing exteriors and others that appeared quite winsome. We’ve put together a list of gadgets that poked out their pretty heads as well as those which weren’t exactly a sight for sore eyes at the CES 2011. 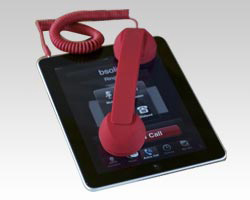 Native Union Pop handset: So not everyone may think this David Turpin creation to be ugly. Played out in bold shades of red, yellow, green, pink and purple, they remind us of everything we don’t miss about those traditional landlines. We’re talking about the bulk and wires here. It can be hooked up to almost any device with a 3.5mm headphone jack and an optional USB adapter enables connectivity to a notebook for VOIP calls. It’s $38 for an unwieldy phone attachment claiming to embed a high quality speaker and microphone. 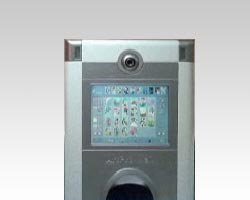 ArtPro Nail Printer V6.1: You may not think this interesting gadget to be an eyesore, until you see what it churns out. The ArtPro Nail Printer V6.1 requires users to stick a finger into the machine and wait for it to execute its artistic skills. Be brave, for there are numerous ready-made nail patterns in varying degrees of flashiness to pick from. The UI is an LCD touchscreen and there’s support for DIY patterns too. It may not be all that bad, but we just can’t help but cringe upon imagining the damage that can be wreaked by an owner with a questionable taste in fashion. 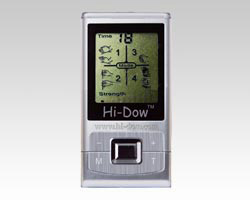 Massage XP III: We still have to come across a gadget which could actually compete with a masseur or masseuse. Powered by a rechargeable Li-ion battery, the Hi-Dow Massage XP III is the size of a regular MP3 player. What can we say but that the entire design is not very appealing to the visual senses. A boring old LCD display lets owners control their massage sessions and up to four pads can be used at the same time. Considering the shape and size it displays, this is one gizmo that will need to work very hard before convincing us of its massaging skills. 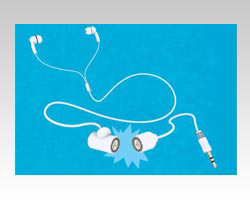 Skunk Juice earbuds: To be quite honest, this pair of earphones is not ugly. But it’s been christened a less than desirable name – Skunk Juice and it’s not very useful. The magnets it incorporates allow for several pair of headphones to be connected to just one player while retaining the audio potency. So you have people getting tangled up over a mess of wires and the inability to tell people to ‘buzz off’ when they ask for you to share your music. 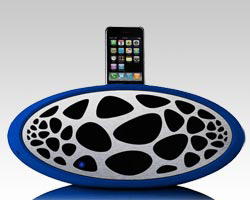 Speakal SB5 dock: The series of speaker docks unveiled by Speakal at the CES 2011 were not all that bad looking. But something about the oval-shaped SB5 speaker and dock unit made us crinkle the nose. What we came up against was a dull gray curvy speaker face with a pattern resembling black animal print and outlined by a bright blue rim. It’s not a very pleasant visual effect and we’ll leave it at that. 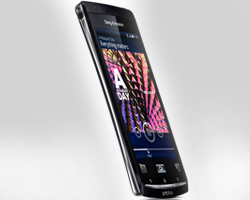 Sony Ericsson Xperia arc: Apt to give the iPhone 4 a complex about its 9.3mm profile, the Sony Ericsson Xperia arc is cited to be 8.7mm at its slimmest and pleasingly curvy at the back. It uses Reality Display with the Mobile Bravia engine for the 4.2” multi-touch screen and if that wasn’t enough, the display is also said to accommodate an enviable number of multi-touch points. The arc’s 8.1MP camera ought to be capable of snapping up good quality pictures in low light conditions due to the Exmor R mobile sensor with the f/2.4 lens. 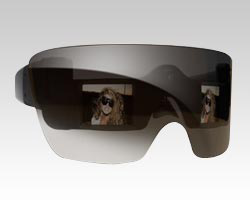 Polaroid Grey Label GL20 camera glasses: When Polaroid brought on board Lady Gaga for their Grey Label branding, we should’ve known what was waiting for us. The GL20 camera glasses are precisely what the name professes them to be. Don the pair and click pictures of the world you see with the integrated camera. These can be uploaded instantly and displayed on the glasses’ LCDs for everyone else to ogle at. The smooth futuristic lines make for a glaring fashion statement and what is it if not a perfect friend to the art of self-expression. 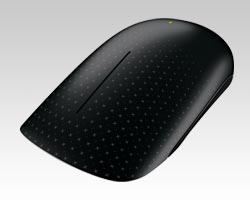 Microsoft Touch Mouse: Apple’s Magic Mouse may be pretty to look at, but get to working on one and you’re in ‘touch’ with the shallow nature of visual beauty. At least Microsoft bothered to take ergonomics into consideration while designing this Touch Mouse which was unveiled at the CES. Dreamed up with Windows 7 in mind, the peripheral is smoothly rounded in the area accommodating the lower part of the palm and slopes downwards towards the front. It accepts multi-touch finger gestures for several tasks such as scrolling, panning, navigating and manipulating content. The whole grayish black exterior is covered with whitish dots spaced regularly apart and the lack of wires simply accentuates the visual appeal by a huge bit. 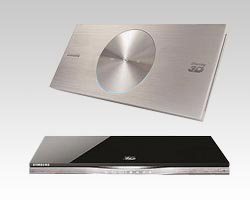 Samsung BD-D7500 Blu-ray player: DVD or Blu-ray players aren’t the sort of gadgets which need to look comely in order to get any attention. Just throw in a number of impressive specs and they’re good to go. So we were pleasantly surprised to witness Samsung unveiling their BD-D7500 at the CES with an incredibly alluring profile measuring less than an inch and supposedly claiming the title of ‘the slimmest ever Blu-ray player’. Flaunting a metallic-looking finish, this device embeds a slot-loading mechanism for accommodating discs and doesn’t starve on the specs perspective. Wi-Fi capability, 2D-to-3D conversion and dual HDMI connectivity are all part of the entertainment value package. 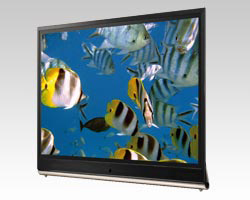 LG 31” OLED display: LG doesn’t need much to convince us that their 31” 3D OLED TV is a slice of the future of home entertainment. It’s not the first time people are getting a peek at the device, but can a 2.9mm thin TV fail to impress us over and over and over again? This sliver of a TV does not use back-screen lighting. The OLED attribute means TV pixels generating their own light for vivid colors and deep blacks. The only question on our minds revolves around the exact availability and pricing details even if we know it won’t come cheap.

There were many more conventionally good looking gadgets that made an appearance at the CES 2011. And we can undoubtedly say the same about the less attractive ones. We’re all for gizmos which pack in functionality with looks and plan to keep up a running commentary as manufacturers fall over their feet to offer the same.