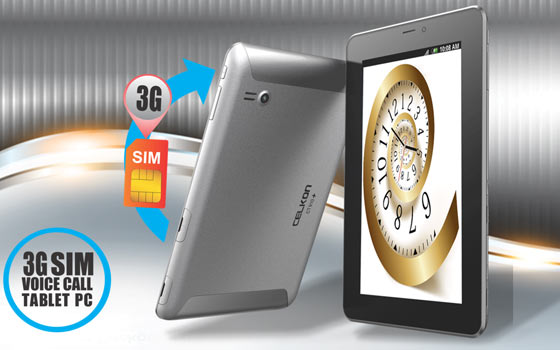 There’s a Celkon CT910+ HD tablet which has gone official, with the company having revealed it just a few hours back in India. This 7-inch Celkon device has been priced at Rs 7,999, making it a humble competitor for other similarly valued products which include Micromax Funbook Talk P362 Tablet and the Lava E-Tab XTRON+. It of course runs the Android OS in its 4.1.2 Jelly Bean avatar.

The main specifications of the Celkon CT910+ HD have been revealed by its maker, so let’s have a look at them. Firstly, it grabs hold of a 7-inch display with a 5-point multi-touch surface. It possesses the capability to house a SIM card, and yes, apart from support for 3G connectivity, it will also be able to provide the voice calling ability to its users by means of its earpiece.

With even 8.1-inch tablets nowadays going for this latter attribute, it’s not much of a surprise to witness voice calling on 7-inch devices. And it was only yesterday that Huawei unveiled its MediaPad 7 Vogue slate with a similar feature. A 1GHz dual core processor, the build of which is unknown, has made its way into the Celkon CT910+ HD, along with 512MB of RAM.

Wi-Fi, Bluetooth, GPS and other regulars will be included in its attributes as well, while a 3,500mAh battery has been revealed to have been placed inside its frame for keeping the device going. Although the moniker of the Celkon CT910+ HD may suggest the presence of a high-definition screen, its resolution has been kept locked at 960 x 540 pixels. It comprises of 4GB worth of internal storage, apart from a microSD card slot which supports expansions of up to 32GB.

Lastly, its camera setup includes a 2MP rear snapper and a VGA front-facing webcam. The best buy price of the CT910+ HD has been placed at Rs 7,999. Interested parties however can keep an eye out for discounted price when it hits shopping outlets.