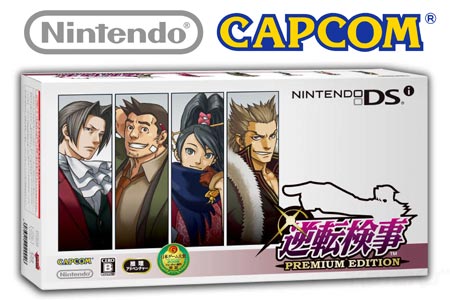 A new version of the Nintendo DSi console reaches Japan. That’s right! Capcom teams up with Nintendo to release a new DSi console in Japan called as the Premium Edition Ace Attorney.

The console Kotaku claims will accompany the new Ace Attorney game-Gyakuten Kenji when it launches in May, 2009. Specifically designed to cater to the needs of Japanese gamers, the new console is in fact Phoenix Wright branded.

The DSi bundle includes a decent colored box along with the game. With a screen print of the Ace Attorney logo, the DSi should excite Japanese gamers who are also fans of the Phoenix brand.

Loaded with a host of content specific to the Ace Attorney game, the design and form factor of the console have been kept rather simple.

The new Premium Edition Ace Attorney DSi console is expected to start shipping around May 28, 2009 in Japan. The console carries a price tag of around $240.