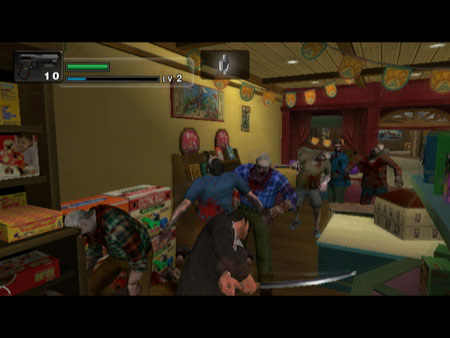 Wii Sports Resort, Wii Music and Animal Crossing: City Folk are amongst the few games that are hitting Nintendo Wii this holiday season. To add to the list Capcom has announced the development of Dead Rising: Chop Till You Drop, which is expected to be available by winter.

The upcoming game is based on Dead Rising, which was launched in 2006 for Xbox 360. It’s an adventure action game and has storyline of being alive in the zombie-infested mall.

Dead Rising: Chop Till You Drop focuses on the story of a journalist named Frank West. The journalist enters in the suburban town of Willamette in search of exciting story. However this search leads him to the local shopping mall, which is packed with dangerous zombies and he has to struggle for the safety. As the story takes place in the shopping mall Frank can enter in to the restaurant or cafes if he is low on health.

Moreover, Frank may fall into the dilemma of deciding the rescue priority of the residents of Wilamette who also sought sanctuary in the mall. He will also have to complete individual cases featured in the game, which would open secrets behind the horrendous epidemic.

The Dead Rising: Chop Till You Drop game has just been announced so the ESRB rating and pricing is yet not available.