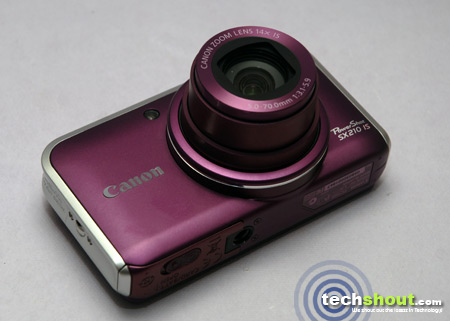 Earlier we have seen some companies such as Panasonic and Samsung focus on high-zoom function. Likewise, Canon came up with Powershot SX210 IS. The company has taken a step ahead with its second model that has reached our review lab. To be precise, we are talking about the Canon 14x SX210 IS that shoots out of its PowerShot kitty. All along, manufacturers have been churning out digital cameras to surpass the abilities portrayed by their predecessors. This particular market segment has formed varying categories within the clan to fight against its competitors, one such being the travel-zoom camera range.

Well, what we meant by taking a step ahead of its predecessor is SX210’s 14x zoom and 14MP sensor compared to the previous 12x, 12MP. Enclosed in a decent box, unpacking the Canon Powershot SX210 IS was a visually pleasant sight in the form of a purple unit. Though purple may not please your aural senses, but we are sure your sight could stand up in a debate. With this high zoom model, Canon has worked on interesting shades of Gold, Purple and Black. The camera flaunts a curved body and is comparatively larger than a compact camera. We couldn’t push it into our pockets but it was pretty light on purses and handbags.

Before we begin dripping out our analysis about its operation, looks and more, let’s quickly brush through some of the varying attributes that its spec sheet reveals. The 14MP CCD sensor and 14x zoom have been accompanied by a 3-inch LCD screen, 28-392mm optical zoom lens, Digic 4 image processing engine, 720p HD Movie mode with stereo sound, Smart auto mode, Easy mode for novice users and HDMI output. It also bundles the several technologies that users can’t do without these days such as Face select and track, Face self-timer, Smart shutter and Auto red-eye correction. Those with enhanced photography skills can dig into the included full range of manual exposure modes. Compared to its predecessor, the Canon SX210 IS sports a different design. This high zoom camera extends the lens at maximum 392mm to approximately 2 inches. In addition, the device also attaches itself to IS (image stabilization) which could be beneficial to those who bear the brunt of shaky hands while taking snapshots. 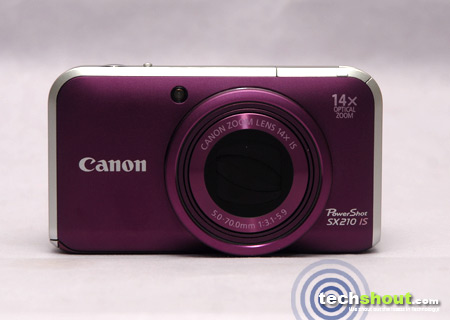 The curvaceous body of the Canon Powershot SX210 IS is outfitted with the on/off button resting on the top panel along with the zoom control which is in the form of a switch. Well, the switch didn’t seem steady at times and was too slow at responding. The back panel is evidently dominated by the LCD screen. The right portion houses the shooting mode wheel and other controls. As the shooting mode wheel sits on the top right of the backside, it can now be accessed effortlessly by the thumb too. The rear panel buttons have been integrated to further simplify operation. The device does come across plasticky. Nevertheless, it has maintained a sassy look. The lens takes its position off the vertical symmetry. The top left displays a self timer/AF assist lamp as well.

The built-in flash is positioned at right edge of the top panel and does not extrude outwards unless popped out. The sight of switching on the device is fascinating with the LCD, flash and high zoom lens coming to life instantly and concurrently. However, the flash jumped out each time we switched on the camera, regardless of whether it is required or not. Otherwise, it seamlessly blends with the body. We had to simply push it back to the closed position when not required and it can be pulled out with fingers rather nails when needed. Moreover, all in all, we feel the design doesn’t allow comfortable handling of the device.

The shooting mode dial has been imprinted with 13 options to choose from. To begin with, the scene recognizing Smart auto turned the device into our arm candy. On using it along with Scene detection technology, the Canon Powershot SX210 IS chooses the most appropriate subject on comparing about 22 elements. The Smart auto turned out to be quite beneficial and impressive. The thirteen options on the shooting mode wheel also include the Easy mode. Shooting in night, portrait, and landscape modes is given easy access with the wheel. Further, the camera is inclusive of Program, Aperture priority, Shutter priority and Manual shooting settings. Interestingly, the kids and pets mode also gets some space on the wheel alongside an Indoor/Party mode, Collected scene modes, and Movie shooting option. Canon has also embedded a dedicated recording button to enable quick and easier access. 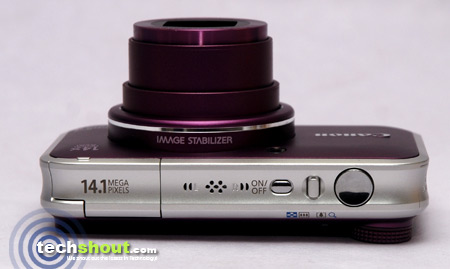 The Face detection which not only forms a part of almost all digital cameras but also turns out to be the favorite among handset manufacturers has been integrated to recognize 35 faces. Plus, the inclusion of Face self timer lets the photographer be a part of the snapshot while the i-Contrast function uplifts shadow details. The inclusion of the miniature effect kept our fingers glued to the device for long. Moreover, by pressing the display button then on the zoom enabled us to control the width of the focus image with the rest of the portion blurred.

A quick dip into the movie recording scenario got us the My Colors settings with options like color swap and color accent to choose from. Interestingly, the Smart auto feature enters the Movie mode as well, with 18 different presets to find the most apt one. The super-quiet transition negates those operational hisses. The Dynamic Image Stabilization further helped us while shooting. Video recording is spruced with Eye-Fi transfer and it also allows direct uploading to YouTube.

Like some DSLRs, Canon incorporates Digic IV processor for a better operation. The Canon Powershot SX210 IS camera let us further ascertain the focus as well as exposure by half pressing the shutter button. Moreover, we could also adjust the time taken by the captured image to appear on the LCD screen. The effects settings can be accessed through the scene mode. Further, the toolbar featuring on the left side on pressing the function/set button brings one to the record mode. Users can lay their hands on Smart Shutter, 3.5 megapixel Low Light mode, Color accent, Color swap, and more. Also, we came across foliage, fireworks and stitch assist panorama settings. Apart from this, the toolbar hosts several other options such as manually adjusting white balance, My Colors effects and quality settings for videos and stills. 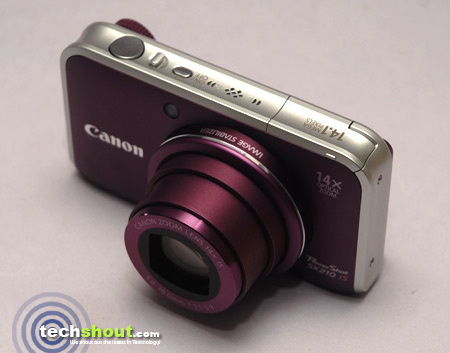 The Canon Powershot SX210 IS packs in a plethora of functionalities and implementing them would sure need ample of storage space. Canon has turned the right knob with support for SD/SDHC cards and also high-capacity SDXC cards. The Smile Shutter comes across as yet another attractive feature that includes Smile self-timer, Wink self-timer and Face detection self-timer. It was a fun-filled experience as the camera took snapshots on detecting a wink.

The image quality delivered by the SX210 seemed pretty good. The wide angle shots did appear slightly ineffective at higher resolution but it wasn’t the similar case at lower resolutions. Noise was decently controlled while low light snapshots didn’t impress us much. We aren’t saying that the video shooting was flawless but it managed to produce some decent video clips. Watching the captured images on an HDTV was made possible with the HDMI output option. However, the company could have pushed the battery life further. 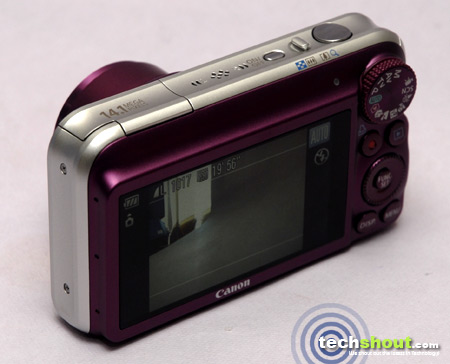 We feel the curvaceous device in purple looks stylish.

The built-in flash seamlessly integrates with the body when not in use.

The 14x optical zoom is quite impressive.

It bundles up several engaging features which include Smart shutter and Smart auto.

The flash pops up each time you turn on the camera irrespective of its required or not.

The battery life is unsatisfactory.

Canon has crafted a compact device but hasn’t managed to eliminate a few glitches that accompany its design. Plus, the price tag of Rs. 19,990 that the SX210 carries is much higher than what we’d expect from this one with several other cameras in the same category offering a stiff competition. However, the Canon Powershot SX210 IS is loaded with enough functions and effects to enhance photography skills. It could pep up photography enthusiasts while bring in a simple and engaging solution to novice users. Weighing the pros and cons, we don’t say that the SX210 has garnered a standing ovation for its looks or performance, but overall the device comes across pretty decent. It gets a rating of 7 out of 10 from us.