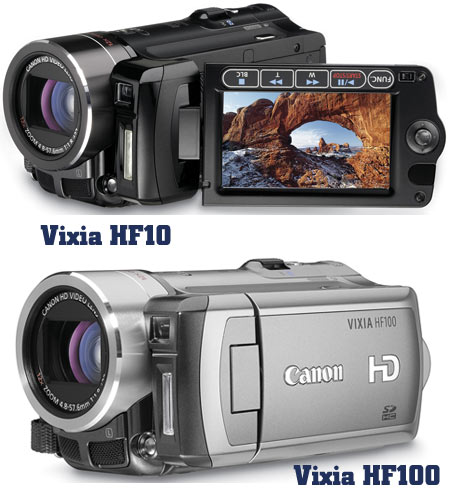 “We are very excited about our new VIXIA family of camcorders, as well as being an innovator by offering Dual Flash Memory,” mentioned Yuichi Ishizuka, senior vice president and general manager, Consumer Imaging Group, Canon U.S.A. Adding, “Consumers are actively investing in HD televisions and they’re discovering the value of capturing memories in HD. Whichever format consumers may prefer, including our revolutionary Dual Flash Memory, all VIXIA camcorders share Genuine Canon Optics and a host of Canon technologies allowing precious moments to be preserved with unrivaled color and clarity.”

Both the HF100 as well as the HF10 camcorder make use of 12x HD Video lenses, 3.3 megapixel full HD CMOS image sensors and full HD lens-to-screen (1920 x 1080 resolution to capture, record and output). The cameras sport both 24p Cinema Mode and 30p Progressive Mode, better for capturing fast action and apt for shooting video that needs to be converted into Web content. They also include 2.7-inch widescreen LCD displays and have “Mini Advanced Accessory Shoes” which can be used to connect optional accessories like a microphone or video light. They all connect to a host Mac or PC using USB.

On the other hand, HF100 features an SDHC-compatible flash memory slot only. 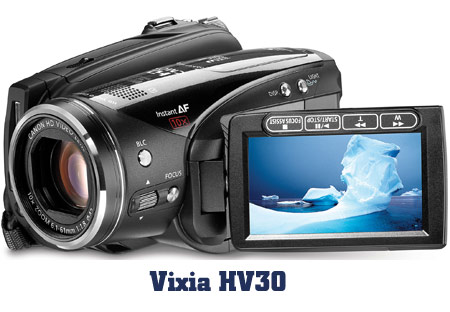 Coming to the last and final camcorder – the HV30, it records its video to MiniDV cassettes, and uses a 10x HD Video Lens, 2.96 megapixel Full HD CMOS image sensor along with a 2.7-inch widescreen LCD. The camera supports the 24p Cinema Mode and 30p Progressive Mode found on the other cameras, and is compatible with Canon’s BP-2L24H high-cap lithium ion battery. 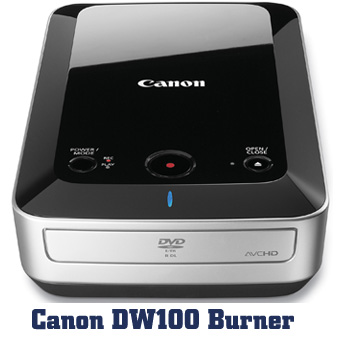 The DW-100 DVD burner is ideal for users who want to burn video to DVD without going through the task of editing it on a computer first. Canon’s new burner connects to the cameras using USB and is designed for one-touch operation. It can burn standard definition DVDs, and also possesses the capability to burn AVCHD DVDs which can be played back in compatible Blu-Ray Disc players.