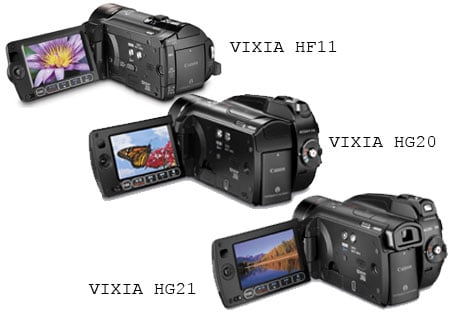 “The upgrade to 24Mbps enables consumers to capture the highest quality of video in the market today, providing the best High-Definition experience on an HDTV” said Yuichi Ishizuka, senior vice president and general manager, Consumer Imaging Group, Canon U.S.A“This increase, as well as dual recording options on all three VIXIA camcorders, is just another example of Canon’s commitment to understanding the marketplace and helping to lay the groundwork to lead the market for the current and next generation of High-Definition camcorders.”

The VIXIA HF11 Dual Flash Memory camcorder is capable enough of recording upto 12 hours of High-Definition video to its 32GB internal Flash drive. It can also record directly into the removable SDHC card. The rest of the two camcorders – VIXIA HG21 and VIXIA HG20 come with the massive120GB and 60GB Hard Disk Drives respectively and are capable of recording upto 45 or 22 hours of HD video into their hard drives as well the SDHC card directly.

The VIXIA is Canon’s core technology that powers the VIXIA camcorders to deliver superb performance by recording highest level of image quality. The camcorders feature Canon’s very own D CMOS Image Sensor for Full HD (1920 x 1080) image capture; the Canon-developed DIGIC DV II Image Processor for superior performance. The Instant AutoFocus feature in them also enables speedier and accurate auto focusing. The last but not the least feature in the camcorders is SuperRange Optical Image Stabilization that corrects the vibration for shake-free images.

The the Canon VIXIA HF11 Dual Flash Memory Camcorder, and VIXIA HG21 and VIXIA HG20 Hard Disk Drive camcorders are suggested to be priced at $1199, $1299, and $949, respectively and will be available by September. They will be come bundled with Pixela ImageMixer 3SE video editing software that is compatible with Blu-Ray disk burning.