When it comes to cameras or imaging products, one company that has global brand recognition is Canon. The Japanese company has been in India from quite some time and they are now enjoying the success. Canon India has seen tremendous growth in the country at a time when other companies are reeling under global economic slowdown. 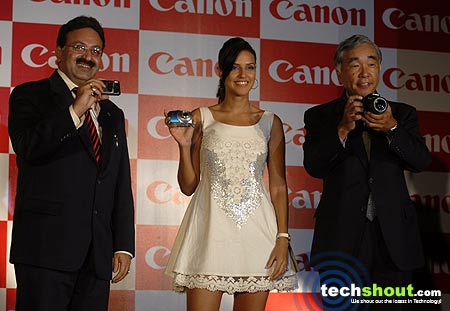 Now at a press event in Mumbai, Canon India launched 23 new digital camera and camcorder products. They seem to be quite bullish on the Indian market and are confident that the firm will maintain the same amount of growth. Present at the event were Kensaku Konishi, who is the president and chief executive officer of Canon India and Alok Bharadwaj, the Senior VP of the firm. Also, Neha Dhupia, the bollywood actress made a special appearance.

Kensaku Konishi explained, “Canon has made a conscious effort to bring the best in photographic equipment to consumers across categories. We pride ourselves on our expanded portfolio of stylish and next generation digital imaging products that will help to make lifestyle a reality for more people in India. The products launched today mark a continuation of our promise of cutting edge technology for our consumers. These are stylish and technologically advanced lifestyle products.”

The 12.1 megapixel Powershot SX200 will also be available, but will come with a hefty price tag of Rs. 24, 995. What caught the attention of nearly everyone was the Canon Powershot D10, the first waterproof digital compact camera which has been priced at Rs. 20, 995. In the DSLR space, the EOS 500D was launched. Costing Rs. 55, 995, Canon India hopes that it sells a lot of units here.

Though much has been said about their new Legria brand for camcorders, what excited Canon India is that they have shipped 500, 000 digital cameras into the Indian market. The 500, 000th digital camera was presented to Neha Dhupia, who seemed quite elated. Alok Bharadwaj explained why Canon India released so many products here.

According to Bharadwaj, “In difficult business environment, one thing which everyone needs is fun and entertainment. We, at Canon, believe that this should not be at the cost of technology and gadgets and hence are launching products which are feature rich, technology packed, high on style quotient and most of all value for money.”

Elaborating on DSLRs, Alok Bharadwaj explained, “Canon EOS is the No. 1 D-SLR brand in Asia and I am pleased to share that Canon worldwide this year is celebrating the 50th Anniversary as the leading DSLR brand. Canon has sold over 53 million SLRs worldwide! And in just 6 years since the introduction of its first digital SLR, EOS has achieved exponential sales of more than 10 million Digital SLRs as photography becomes more accessible to amateurs and professionals alike. In India, we reach out to this community through our Canon Edge programme which has almost 6000 members today.” 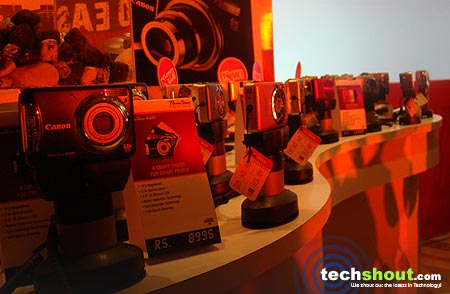 Products were not the only thing on the menu by Canon India as the digital imaging company also revealed a lot of offers for the summer as well as contests and initiatives that one feels that have been taken to further improve their brand image over here. The ‘I can with Canon’ campaign is one such example. But Kensaku Konishi mentioned that the Canon Experience showrooms are also making a huge difference to the consumers’ perception but added that the firm is also putting in a lot of money into R&D.

We also had a small chat with Alok Bharadwaj, so keep watching this space for the whole interview.