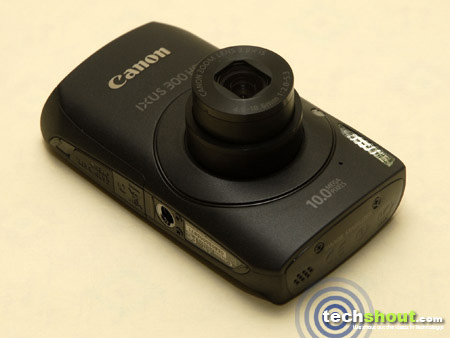 Anything connected to pictures has been reminding us Victorian death photos, like the Canon Ixus 300 HS that we reviewed this week. The history of photography has probably never had anything as creepy as these death photos coloring it ugly. The story goes that taking photos was so expensive in those times, you were lucky to have yourself photographed unless you were dead. Depending on your psychological constitution, you’re likely to feel empathy for the bittersweet melancholy tingeing such memories or spend sleepless nights in bed with all sorts of nightmares about being photographed with dead people. Cameras and photography have been producing a harsh effect on our mental well-being since some irresponsible colleague dropped us a link with a whole host of such photos.

The first thing that hits you about the Ixus 300 HS is the fact that it looks very different from the majority of digital cameras out in the market today. It does not fit itself into a boring box-like chassis and the somber black finishing on the model we reviewed was of a matte texture. For those who think that the camera looks similar to a bar of soap more than anything else, this one’s not going to leap out of your hands like one. The entire exterior feels akin to sandpaper that’s had at least half a dozen rough wooden surfaces, like those of coffins, smoothed out. Though we like the firm grip it offers, gloss or non-gloss finishes are clearly a matter of personal opinion. The in-box contents packed along with the camera include an HDMI cable, a software CD, an AC adapter kit and a USB cable apart from the unavoidable user guide. 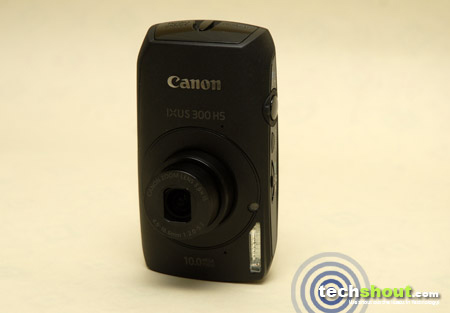 The cursory glance at the main specifications may not look all that extraordinary with 3.8x digital zoom, a 10MP lens and 3” LCD. After taking a quick look at all the buttons and icons peppering the Ixus 300 HS, you need to forgive the fact that this camera does not spell out how you can access each and every main function on its controls before it gets easier to study its various features. Sitting besides the PureColor II G TFT LCD is the main control that works like a jog dial. You’ve got to press on it lightly in order to see the controls through an on-screen display since the icons have been left out quite inconsiderately. But it’s going to seem like Canon’s made a puzzle game out of understanding the cameras various features until you manage to figure this out. Images simply jump out at you through the LCD that can be set at up to five levels of brightness. Everything looks so much more cheerful and alive through the screen, like the dead goldfish floating around in the fishbowl on our desk.

The Canon Ixus 300 HS offers a wide range of shooting options; it’s just the beginning with the vivid, neutral, sepia, black and white, Positive Film, lighter skin tone, darker skin tone, vivid blue, vivid green, vivid red and custom color options. There’s an automatic white balance mode supplemented by Day Light, Cloudy, Tungsten, Fluorescent, Fluorescent and custom modes. You can also set the camera to standard, super slow motion, Color Accent or Color Swap modes for capturing videos. The self-timer can be turned off, set to 10 seconds or alternatively, 2 seconds, while content can be captured in 1280 x 720p, 640 x 480p or 320 x 240p resolutions. The only problem is that accessing and adjusting the effects is not an intuitive task since user-friendliness is not the high point of this camera. Though it seems like Canon had regular consumers in mind while designing the camera, the difficulties with moving between various functions may continue to haunt you even after you’ve spent a reasonable amount of time with the device. 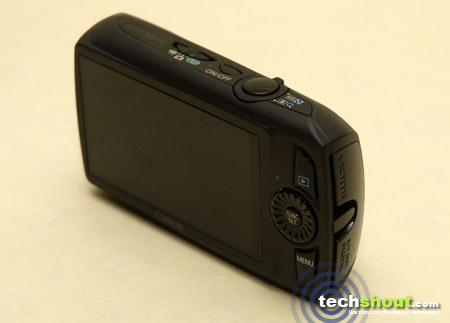 So apart from the 720p HD video mode, you can shoot in high-speed video mode at 240fps and play back footage at 30fps for the slow-motion effect. It’s probably not as exciting as it sounds since 320 x 420p resolution videos is all you get with this feature and the picture quality reminds you of webcams integrated into standard notebooks. As to the question of how much the f/2.0 – f/5.3 aperture range and back-illuminated CMOS sensor help in delivering low-noise images in poorly lit conditions, it works really well at that. The company’s HS system consisting of the 10MP high-sensitivity CMOS and Digic 4 imaging processor further contribute to the ability to click low noise pictures in different lighting conditions. The device integrates auto ISO sensitivity levels of 125, 200, 400, 800, 1600 and 3200 as well as manual exposure modes. Depending on the zoom position, the camera is equipped to take 3.7 to 8.4 shots per second in normal to high-speed burst modes. All of these integrated technologies work together to give you some really decent content capturing options.

The average person shopping for a camera tends to look out for the numbers accompanying MP, digital zoom and pricing before anything else. In other words, fair pricing accompanied by features that offer value for money are some of the things customers normally chew over while buying a camera. Although the Canon Ixus 300 HS camera does appear starkly forbidding when it comes to the visible controls, it proffers a lot of user-selectable options for taking stills or capturing videos. The overall chassis design is pretty even if the camera doesn’t try hard to place itself apart from its counterparts with respect to the main features and functions. We don’t believe that the pricing makes a great talking point in comparison to other cameras either. But it only means that you’ve got as much reason to choose this snapper as you do any other camera and we mustn’t forget that it looks nicer than many such devices of its kind in the market. 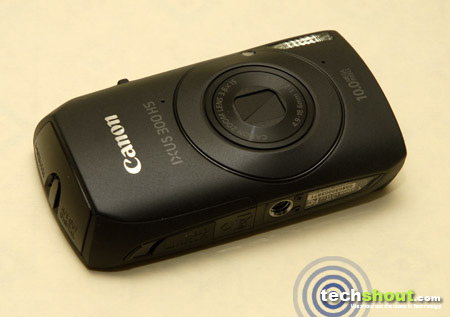 The Canon Ixus 300 HS has a gracefully curved body that doesn’t slip out of your hand easily if it’s the non-gloss, textured model you’re holding.

So what if the high-speed movie mode shoots only in 320 x 420p resolutions, it’s still an interesting feature to have on your camera.

We also like the fact that the rechargeable Li-ion battery powering the Ixus 300 HS does not run out on you speedily.

Canon clearly did not execute the idea of simple operation by regular users with this creation. It’s difficult to move between the various functions on this camera even after studying them well.

Canon’s attached a Rs. 24,995 price label to this device that looks just as good as the photos it captures. It’s been packed in with a load of features which can make capturing pictures a downright pleasure to the amateur photographer. We’re awarding the Canon Ixus 300 HS camera an 8.6 out of 10 rating.