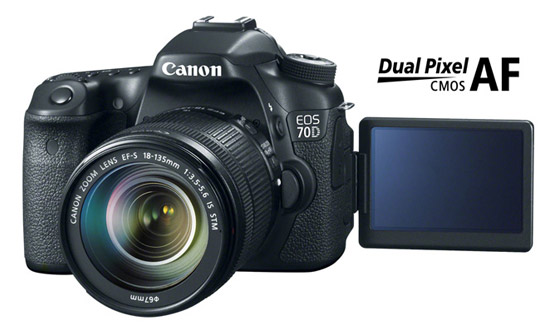 The Canon EOS 70D DSLR is the new kid on the block, and it’s out to replace the company’s 60D variant from the same range. Its price has been revealed by Canon to have been placed at $1,199 (only body), and it’s slated to hit markets in September this year. Equipped with new Dual Pixel CMOS autofocus technology, this snapper seems to have been aimed particularly at amateur filmmakers, who have enjoyed the benefits game-changing products from the company such the 5D Mark series and even the 7D.

Manual focusing is always a hard task to handle for those looking to shoot under guerrilla conditions. And with cameras that feature ordinary autofocus, a lot of effort is needed to line the shots accordingly. That’s where the Dual Pixel CMOS AF system of the Canon EOS 70D comes into the picture. Claimed to provide precise focusing for its full HD videos (up to 30fps) as well as still images, it actually works with the help of a phase-detection module on the snapper’s image sensor plane.

On this plane, all the effective pixels are enabled to perform both still imaging and phase-detection autofocus simultaneously so as to achieve improved AF performance over other cameras. Users of the Canon EOS 70D will thus be able to achieve shorter focusing times, improved tracking performance as well as smoother autofocusing during video shooting, claims the company.

Although the focus seems to be more on video, the image-capturing abilities of the camera haven’t been ignored by the company. Its new 20.2MP APS-C CMOS sensor couples with a DIGIC 5+ Image Processor to deliver an ISO range of 100 to 12800 (expandable to 25,600). Not to mention, the advanced autofocus features apply to still images as well. Apart from these features, the Canon EOS 70D also kicks in a 63-zone Dual Layer Intelligent Focus, Color & Luminance AE metering system for improved metering.

Other important additions that make their way into the device include support for Wi-Fi and NFC which is fast becoming a norm these days. Its display is now a touchscreen one. This vari-angle 3.0-inch Clear View LCD monitor II grabs traits like multi-touch operation and touch-based AF as well.