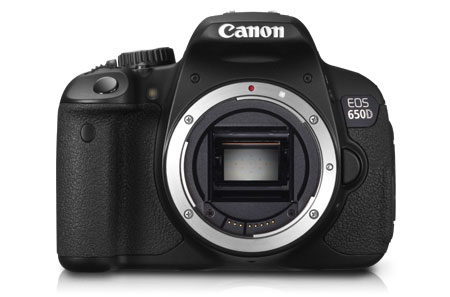 Canon’s entry-level DSLR range in India has a new flagship device in the form of the Canon EOS 650D which was launched in the country yesterday. This snapper comes with a capacitive-touch LCD screen, and has two new EF lenses to tag along.

The 650D kicks in a hybrid CMOS sensor with its effective pixels set at 18MP. This attribute is said to render ‘vastly improved’ continuous autofocus. It has also been revealed that the camera’s auto-focus system has been equipped with a new 9-point all cross-type AF, which works in tandem with the sensor to deliver focus even before the shutter is pressed. And just as with the EOS Rebel T4i, auto-focussing in live-view can be done by touching the desired areas on the 650D’s 3.0-inch, vari-angle, capacitive-touch LCD screen.

“The EOS 650D is a revolutionary product developed from ground up to offer unmatched performance particularly while shooting video. It is the first DSLR in the world to feature a highly intuitive and usable capacitive touchscreen interface. It is also the first EOS camera to feature a Hybrid-Sensor based AF system, allowing continuous autofocus. This particular feature when combined with the new STM lenses, allows for unbeatable performance for video shooting. With the 650D, we are targeting highly discerning users who demand professional still and motion imagery results, at the most competitive price point,” shared Seiji Hamanishi, Assistant Director – Imaging Communication Products division, Canon India.

This DSLR comprises a standard ISO range which can be stretched by users from 100 to 12,800. Both the lenses that are being released along with the snapper come with the company’s new STM (Stepped Motor) trait that supposedly makes for faster, improved and virtually silent focusing.