You can start submitting projects to Kickstarter Canada, like right away

If you’ve been living in Canada with awesome Kickstarter-dependent ideas swirling through your head, it’s time to celebrate. The crowd-funding website has now opened shop in Canada. You can start submitting project ideas right away and if you’re merely looking to back a cool venture, 34 are up for consideration already.

Kickstarter has branched off into Canada more than three years after its US launch and roughly a year past its UK debut. Some of the gaming-related projects on display are Sera (a sort of parody on Siri), The Curse of Tristram, Drop and Ground Pounders. 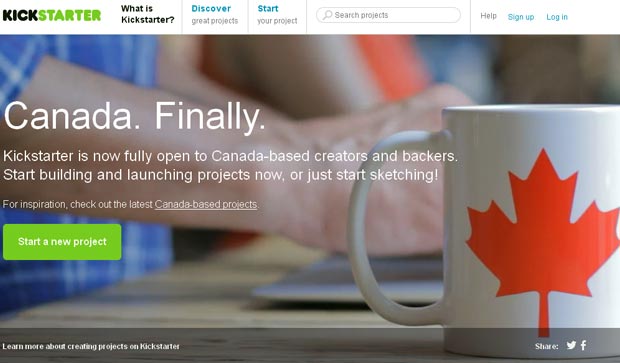 If you’re looking for something more along the lines of a tech toy, there’s Spiri. It’s a programmable drone project which has already received $117,291 of its $125,000 goal, with 311 backers and 60 hours left until the funding period expires.

Right through the following weeks, Kickstarter will be holding gatherings, workshops and so on with the idea of getting more people onboard. It mostly appears to be aimed at potential developers who’d like to present their ventures and would like to better understand how to go about it.

The company’s been doing very well in the US and the UK, thanks to some very creative developers. Its expansion into Canada has probably raised hope for those rooting for its introduction in other countries. But it’s possible that a certain issues like this one are could raise their ugly heads unless more stringent policies are put into action.

Meanwhile, you may want to try one of these alternatives in case Kickstarter isn’t quite doing it for you.