You can now send SMS texts through Facebook Messenger

Facebook has been busy these past couple of weeks trying to force you to download its Messenger and Moments apps. It’s now planning to invade your SMSes as well, rolling out a new feature which allows the former to act as the common meeting ground for both your Facebook and SMS messages.

The new ability can only be accessed by Facebook Messenger for Android users, since Apple won’t allow iPhone consumers to change the default messaging app. To activate it, all you have to do is head over to the Settings page in Messenger, tap SMS from the list, and switch on the Default SMS app option. 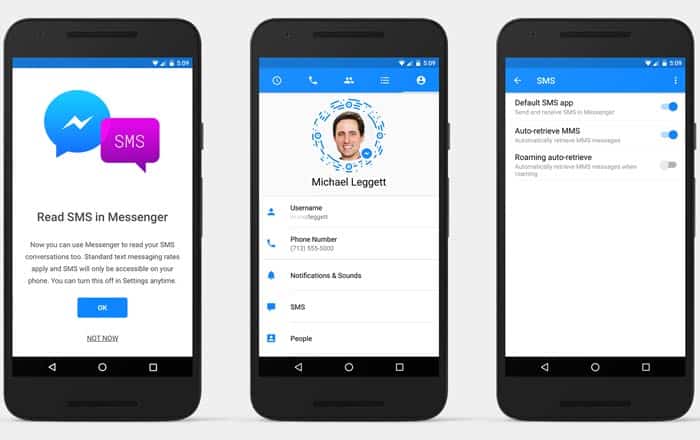 Once this is done, you’ll be able to send and receive all your SMSes and Facebook texts within Messenger. The arrangement would effectively reduce the time you’d have to spend switching between the two if say your friend is sending you a GIF at the same time your mom is messaging you on SMS.

Distinguishing the two could prove to be tricky, which is why all SMSes are marked in purple and all Facebook texts are in blue. The company further ensures that there are separate SMS and Messenger threads for the same person, since having only one page for both would have been confusing.

Other than the convenience of having a two-in-one structure, the new system will also allow for SMSes to be displayed as floating Chat Heads. Moreover, you’ll be able to send rich content like stickers, emojis and location sharing. However, features like GIFs, voice and video calls, send money, and request transportation will be Messenger-only.

Standard SMS charges apply when sending a text, while Messenger will continue eating away at your data. Facebook is currently rolling out the update for Android users now. You can download the app via the Play Store.