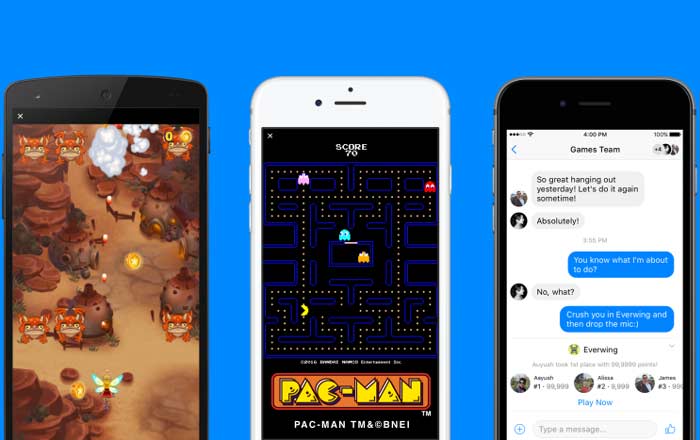 Facebook’s gone full steam ahead with games on Messenger, launching a slew of titles and rolling them out to over 30 countries. You can now challenge friends to games like Pac-Man or Space Invaders right from your conversation window.

To recall, Facebook Messenger games initially started out with hidden games likes chess and then expanded to more public ones like basketball and soccer which were played more than 1 billion times. The app’s all-new Instant Games feature is far more complex than its predecessors thanks to having fairly advanced graphics.

Instant Games is easily accessible via a game controller icon located within a conversation window. You can choose between various titles such as EverWing, Endless Lake, Words with Friends, Hex, Arkanoid, 2020 Connect, and Shuffle Cats Mini.

Once a round is over, your score will be viewable in the chat and can be challenged by your friend or anyone in the group. You can also seek out games by searching for it in Messenger’s search field or on Facebook’s News Feed where you can either opt to play solo or with friends in Messenger.

In a blog post, Facebook said Games on Messenger are the first to be available for the company’s new Instant Games cross-platform gaming experience. The social media behemoth plans to add new games and fresh ways to play them in the future. The feature is now in the process of rolling out to newer version of Android and iOS.