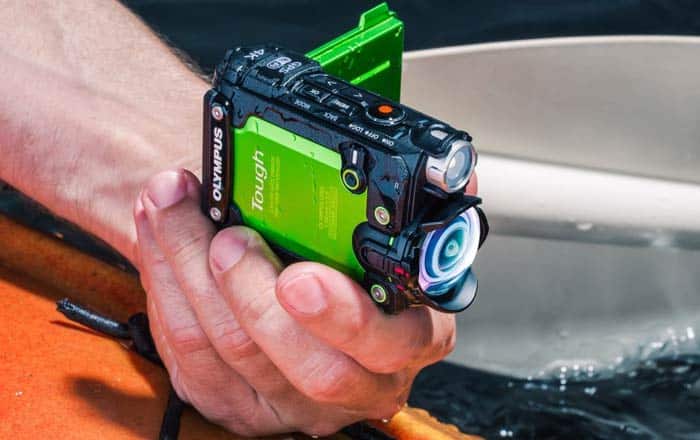 Olympus has burst into the action camera marketplace with its brand new Tough TG-Tracker, marking a significant departure from previous offerings by the company. The new product will have to face-off against heavy-duty competitors like Sony and GoPro within the sector.

The Olympus Tough TG-Tracker has a leg up over its opponents by virtue of having its ruggedness built-in. Most other action cams rely on protective housing to ensure durability. This translates to extra baggage and could even lead to difficulty capturing accurate sound.

Olympus claims that the camera can survive anything you throw at it, whether you’re travelling up a freezing mountain or whitewater rafting through a river. In terms of numbers, it can endure being pushed under 100ft of water and handle up to 220 lbf of pressure. The device is also dustproof, shockproof by up to 7ft, and freezeproof up to 14-degree Fahrenheit (-10 Celsius).

Also Read: Olympus Air hooks up with a smartphone to offer ultra-enhanced images

Further enhancing the Tough TG-Tracker’s resilience is the included Dome Lens Protector and Underwater Lens Protector. One of its standout features is its insanely wide 204-degree lens which the company says can supply almost a panoramic perspective. The firm has also equipped it with Electronic 5-Axis Image Stabilization for shake-free videos which can be captured in 4K resolution at 30fps.

Another welcome addition comes in the form of a tiltable 1.5-inch LCD screen, a rare sight within the world of action cameras. There’s even a LED light which functions as a flashlight. The Olympus offering further comes with several smart sensors built-in such as a compass, temperature sensor, accelerometer, and barometric pressure sensor.

The Olympus Tough TG-Tracker is currently up for pre-orders on the brand’s site priced at $349.99, with its official release set for June.