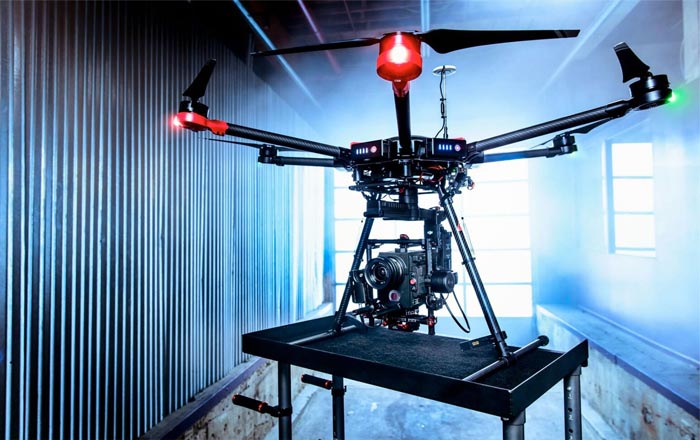 Filmmakers have since long been content with the DJI Phantom series quadcopters but the company still had to go ahead and come up with something way more exciting that those. Meet the new Matrice 600 drone which lets you launch a camera stabilizer into the sky, which in turn means the something like a RED Epic or an ARRI Alexa Mini can be affixed can shoot footage from the sky.

At $4599, this piece of machinery doesn’t come cheap, but it’s anyway targeted towards producers with big budgets. The DJI Matrice 600 has a 6kg payload, and is capable of lasting for up to 15 minutes with a professional camera like the RED Weapon attached to it.

It does this with the help of six ‘smart’ batteries which ensure that your camera is safe just in case some of them die while the drone is still in the air. DJI has introduced a new video downlink standard called LightBridge 2 with this hexacopter, which allows it to stream in 1080p at 60fps from distance of up to three miles.

Moreover, the Matrice 600 has also been equipped with a fresh flight controller called the A3, and is available with three GPS units and three IMUs. It has been launched by its makers alongside two new accessories.

These include an updated version of the Osmo hand-held rig which offers added stabilization this time around, and the Ronin-MX. The latter is an update to the company’s handy camera stabilizer, which now comes with its own IMU and Bluetooth link for improved stability.

Also See: DJI’s new Phantom 4 is so smart it can avoid obstacles on its own

The DJI Matrice 600 is already available for purchase, and same is the case with the new Osmo and Ronin accessories.