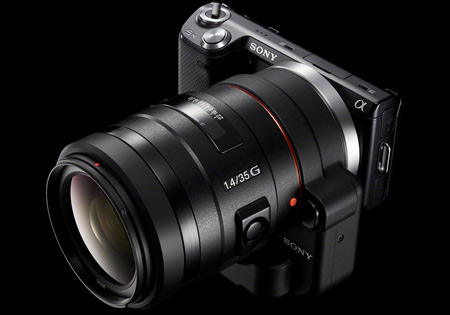 The Sony NEX-5N camera may look familiar to anyone who’s seen the NEX-5. The company has been hiding a bunch of new offerings under its sleeve and this E-mount interchangeable lens camera is just the first of them.

The NEX-5N camera’s Exmor APS HD CMOS sensor has been bumped to 16.1MP from the original NEX-5’s 14.2MP capability. Squeezing down to almost 23.3mm at its slimmest point, this compact snapper has a tough, but light magnesium alloy body and a touchscreen interface to show. The 3” Xtra Fine LCD surfaces a new-fangled Photo Creativity Touch interface for enabling easier composition, shot review and tweaking of settings.

“The NEX-5N camera extends the sleek, minimalist design of the acclaimed NEX-5,” explained Ernesto Bravo, senior business manager of the alpha group at Sony Electronics. “But it’s also a giant step forward from its predecessor in terms of still image and HD video quality, Auto Focus and speed-of-capture performance.”

The NEX-5N can shoot AVCHD Progressive full HD videos along with stereo sound at 60fps. A Bionz image processing engine runs the show behind the scenes for churning out crisp, low noise pictures. Users get ISO sensitivity levels of up to 25600 and object Tracking Focus has been added to the list of available features. Need we mention that there are the usual touchups and effects to look forward to while using the camera?

Slated to arrive this September in black or silver hues, the Sony NEX-5N camera will sell for roughly $700 with an 18mm – 55mm kit zoom lens. It’s around $600 for just the body. Coming in November are the $400 LA-EA2 mount adapter and the $350 FDA-EV1S OLED viewfinder for it.