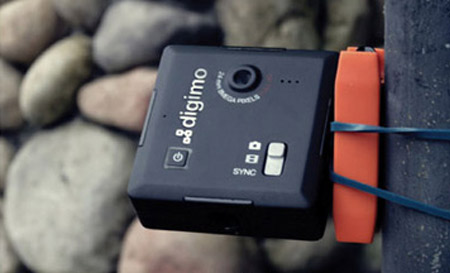 Yet another interesting design creation surfaced recently, the Digimo camera concept enables users to wirelessly snap pictures of the same subject from different angles through a set of devices placed in varied positions. Designed by Sangik Lee, photographers can utilize the added flexibility to expand their originality and imagination through the images snapped.

Equipped with a touch screen, this camera which was picked up on Yanko Design allows users to configure and link multiple devices together wirelessly through which natural still images can be captured from different angles at the same time. Encouraging photographers to be more creative, the gadget’s highly flexible nature enables it to be placed in different positions or mounted onto various objects.

So how does it work? Users can record videos from different angles by mounting two or more devices onto a bicycle and also save them within a single file, attach it to a pole or tree or whatever else with just a rubber band as well as get an added 50cm reach for capturing stills in places hard to reach through the telescopic leg. What’s more, the concept will come holding a number of features such as 2.4GHz Wi-Fi for snapping in pictures at 100ft, wireless charging and 3D capability by combining two Digimos with an attachment leg.

Besides these, the camera can also be utilized for live monitoring by placing one device in the desired location and the second in-hand as a screen module. Smart as it may sound, the Digimo camera is still a concept which may or may not become reality. But, until then we still have a handful of other nifty photography options available.