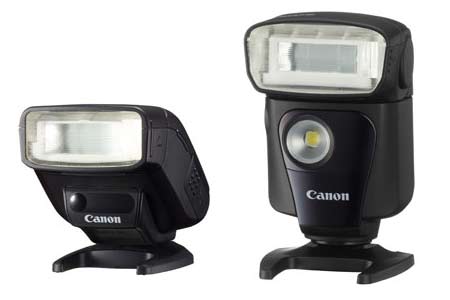 Though the sole purpose of possessing a flash solution has been to illuminate a dark scene, the artificial light has expanded the horizons undeniably in terms of its functionality over the time. To offer DSLR users a lightweight, versatile external flash option, Canon has now come up with its new Speedlite 320EX and Speedlite 270EX II flashguns.

Portability at its best, the 320EX model features a built-in LED continuous light option which renders full-time illumination for short distances while shooting video on a DSLR or PowerShot digital camera. The integrated light appears perfect for video recording and can be used as a modeling light or as an AF assist beam during Live View shooting.

The above stated version also embeds a flash release function which facilitates wireless flash shooting by enabling the shutter to be released from the flashgun with a two-second deferment. Distinguished for its pocket-sized, grip-friendly and intuitive design, the new Speedlite 320EX further enables bounce flash shooting with six positions including ceiling bounce for vertical shooting, and rear-wall bounce.

The Speedlite 270EX II from Canon comes powered by two AA batteries and allows users to control flash functions and input settings using the camera’s LCD monitor at the same time. This one incorporates a quick-lock mechanism and a metal mounting foot for secure and easy attachment and reliable contact. Inspired by the 270EX model, the 270EX II follows the 320EX flashgun by accommodating a remote firing function.

Users can now conveniently use these models as slave flash units in E-TTL wireless auto-flash configurations with other E-TTL compatible EOS and PowerShot cameras. The 320EX also lets users experience shooting with four position steps from 0 degrees to 90 degrees.