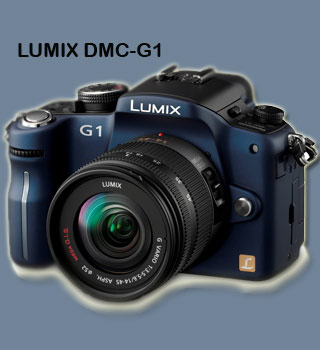 Equipped with the Micro Four Thirds System standard, the novel camera comes minus any internal mirrors. This lowers the flange back of the LUMIX G1 i.e. the distance between the mount and the image sensor, from 40 mm to nearly 20 mm. The internal mirror structure system normally defines digital single-lens reflex cameras.

According to David Briganti, National Marketing Manager, Imaging, Panasonic Consumer Electronics Company, “We are honored by Pop Photo’s selection of the LUMIX G1 as the 2008 Camera of the Year, as Panasonic’s intention was to change the digital photography space. Panasonic created a new market with the LUMIX G1, putting “DSLR-like” features into a compact body that would still be powerful enough to take professional-quality photos, but easy enough for beginners to use and ultimately help them to improve their photography skills.”

Having a weight of about 580 Gms including its LUMIX G VARIO 14-45mm/F3.5-5.6 ASPH/MEGA O.I.S. kit lens, the compact camera is easy to use and portable too. The camera also boasts of having the title of the 2008 Camera of the Year by Popular Photography & Imaging. The camera will sport red, blue or black colors.