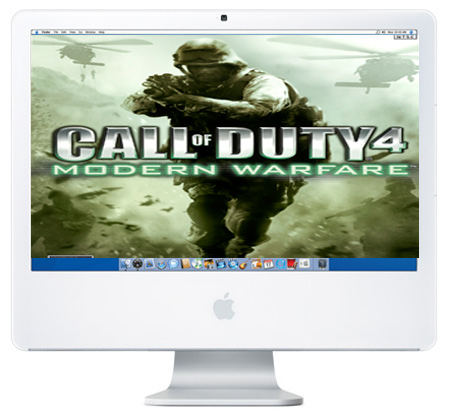 Video game publisher Aspyre Media has confirmed that Call of Duty 4: Modern Warfare will be coming to Macs. This news has been much awaited by many because the game offers amazing high-definition graphics, 5.1 surround sounds and a superb multiplayer experience.

Call of Duty 4: Modern Warfare is currently available for play on the Windows PC, Xbox 360 and PS3 platforms. Now, Mac users will also get to be a part of the battle.

Call of Duty 4: Modern Warfare features a super-tense storyline, which is filled with many twists in the plots. Gamers can expect to be thrown into battle which is realistic to the core. The war game features amazing special effects such as rim-lighting, depth of field, texture streaming and character self-shadowing.

One of the best features of Call of Duty 4: Modern Warfare however, seems to be the community-oriented multiplayer gameplay.

Other than this, you can expect a wide variety of unlockable perks, hot-join and matchmaking and the ability to create a class and party capabilities ensuring that players of all skill levels can join in the fun.

Call of Duty 4: Modern Warfare for Macs also offers 100 challenges and a number of new game environments and modes, delivering a wide variety of possibilities to those who are engaged in the game.

That’s not all because all included in the game is Kill-Cam, which is a favorite feature with Call of Duty fans. This feature offers instant replays of important moments.

This video game was developed by Infinity Ward and has been licensed by Activision.

Call of Duty 4: Modern Warfare is slated to be available for Macs in May 2008. However, if you cannot wait for such a long time, you will soon be able to preorder it through Aspyre’s web site for a price of $49.99.