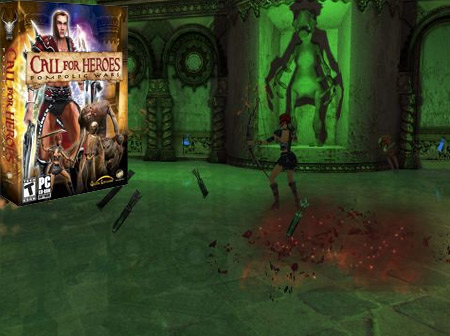 Data Deign Interactive has revealed that they have attained the security rights to publish and develop the Nintendo Wii version of the PC game called ‘Call for Heroes: Pompolic Wars’. The 3D RPG action game is set in a fantasy world created by Quotix Software a games developer based in Serbia and Montenegro.

Stewart Green MD of Data Design Interactive, said: “This is already a great game on PC, which is greatly improved with the extensive use of the Wii controllers, to make the player immerse into the magic casting and weapon wielding adventure. We are excited to bring this new genre onto the Wii console.”

“We are really excited to work with Data Design Interactive on the Wii version. We are sure that their expertise will be very positive. The game will take full advantage of the unique Wii controllers, and deliver a unique gameplay experience,” stated Quotix Software, Attila Siladji, Developer of Call for Heroes: Pompolic Wars.

A little about Call for Heroes: Pompolic Wars:

Call for Heroes: Pompolic Wars is a third-person action game with RPG elements. The game positions players in a fantasy medieval world, where a dimensional portal to the Outer Worlds has opened, and an enemy from the darkness has intruded the world. Led by a demon named Pompolic, the armies of demonic hordes have taken over most of the planet. With mysterious origins, Pompolic’s malevolent spiritual being possesses supernatural powers.

His desire is to possess the people and turn them into minions of his dark army, as he wields his power through his servants, the Dark Souls. These Dark Souls – protected by a horde of monsters – are poisoning the minds of his victims and making them slaves of evil. The denizens of this world are on the edge of total annihilation. However, a little hope still exists in the heart of the remaining citizens.

They feel that there exist brave hearts who can save the world from the source of the evil power. If the Dark Souls were to be captured, the onslaught would stop, and Pompolic would be defeated; the call for heroes is made…

The PC version of ‘Call for Heroes: Pompolic Wars; game is due to ship in June, 2007.