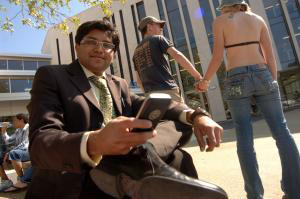 Academics at the University of Portsmouth have developed a mobile phone game that is aimed at helping international students cope with ‘culture shock’ and to get accustomed to university life in the United Kingdom.

The brain behind this game with a cause is Nipan Maniar, games technology expert, University of Portmouth. He hopes that this ‘Culture Shock’ breaker game will help international students to deal with moments of cultural awakening such as going to the pub and watching people being affectionate with each other in public.

The game called C-Shock includes graphics of a student drinking, and a couple displaying affection towards each other in public.

In fact, Nipan Maniar the main man behind the C-Shock game arrived in the UK from India five years ago as an international student. He along with his research assistance, Dr. Emily Bennett, developed the prototype of the mobile phone game after consulting with the University’s International Office and the British Council.

Nipan said that the C-Shock mobile game would act as an ‘e-mother’ or ‘mobile mummy’ for new students.

According to Nipan, “I found some aspects of British culture very novel, and certainly things such as interacting socially with others, say in a pub were very different to what I was used to in my own culture in India.”

“I though it would be great to have a learning vehicle or device to help people overcome the culture shock because of you have not experienced such things before, it’s hard to known how to react or behave appropriately,” he added.

The C-Shock mobile game follows an international student arriving in the UK for the first time. The main aim of the game is to reduce the character’s ‘culture shock’ rating from a default of 100 to zero by performing a series of tasks that introduce culture- shock-inducing incidents and images.

In fact, the game begins with the first day at a UK university for the newly arrived student. The student is shown a map of the campus and is given tasks to find specific locations. Clicking the images along the way warns the student about what to expect. For example, it is acceptable for students to drink alcohol and it is okay for people to publicly display their affection for each other.

Besides, the Culture Shock mobile game also includes important information such as police and emergency numbers.

“C-Shock could be used to guide students through events such as registration as well as help them with basic information like getting to a bank or ATM that’s closest to them. You could incorporate a whole city guide into the game so, in effect, the new student has this interactive learning tool to quickly settle into a new city very quickly,” Nipan said.

“Using mobile phone games to communicate with people and educate in this way is a new concept, and the potential is limited only by one’s imagination. I expect many other universities will follow suit. The ability to generate revenue from in-game advertising is also a significant factor in why this type of application would be attractive to organizations in the private sector as well,” Nipan concluded.

The Culture Shock mobile game is in the final stages of development, and is expected to be available for download on to mobile phones from the University of Portsmouth Web site later this year.