Buzz!: The Maha Quiz Game rolled out by Sony, in India

Times have changed, and now people dig for brains rather than plain brawn. Perhaps Sony Computer Entertainment Europe (SCEE) sensed this and that’s probably the reason why they have introduced “Buzz!: The Maha Quiz” PS2 game in the Indian subcontinent. The launch kicked off at the chic Vie Lounge at Mumbai, India. Very obvious from the name itself, this title is a quiz game featuring more than 5,000 questions ranging from celebrities to nature to sports to history to music to geography. The Indian version of the game has been appropriately and intelligently designed, wherein it incorporates a few India-centric questions too which have been created in association with Derek O’Brien and Associates. Buzz!: The Maha Quiz has been developed by the BAFTA winning Relentless Software and is promoted by SCEE in the Indian market.

Coming to the gameplay of Buzz!: The Maha Quiz is literally like playing a live quiz show. With Mr. Buzz taking on the role of the quiz master, players get to use their gray cells in this title where the mind and not the might play a key role. But that’s not it, with the intelligence you need to be equally quick with your fingers too as in this multiplayer quiz game there are rounds in which the faster you answer, the more points you earn. Mr. Buzz’s super-curvaceous assistant Rose adds some visual treat too. Included with the game are four modified handheld “buzzers” that are to be used to hit the answer the questions within the least possible time.

Commenting on the new title, Atindriya Bose – Country Manager, Sony Computer Entertainment said, “Buzz enjoys a tremendous fan following across the globe because of three key elements – accessibility, character and sociability. It’s the live-in-your-living-room game show experience that everyone can enjoy, thanks to the Buzz! Buzzers. The cheeky personality of Buzz guides the tone of the game and related communications, setting it apart from bland competitors. Rose with her vixen-like appearance and appeal, also adds glamour to the game. After the success of Singstar Bollywood, it is only natural that we bring in Indian game contents in such a popular franchise as Buzz!: The Maha Quiz.”

Also present at the event were celebs including ace critic Rajeev Masand, cricketer S. Sreesanth, NeoSports anchor Radhakrishan and latest Bollywood heartthrob Neil Mukesh. All these lucky men got to lay their hands on the new game and enjoy a short stint with Mr. Buzz and Rose. 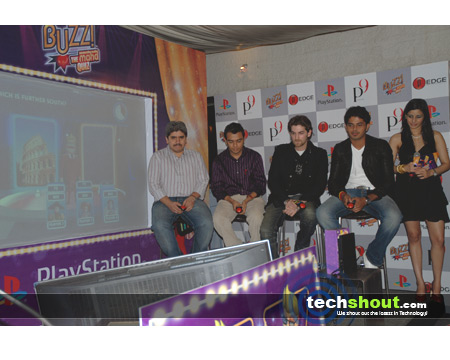 Before the show began, my colleagues and I couldn’t get over this rather funny looking guy in a red suit, little did we realize that he would soon take center stage as guess who he was – the very Mr. Buzz.

Buzz! is originally a series of videogames developed by UK software house Relentless Software and published by Sony for the PlayStation 2 console. It includes the platinum selling Buzz!: The Music Quiz, Buzz!: The Sports Quiz and Buzz!: The Big Quiz and the Maha Quiz. 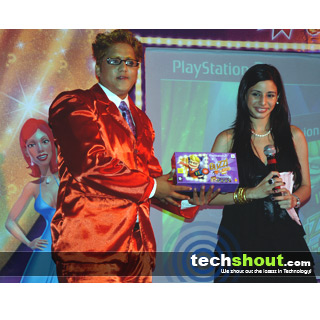 In the all-new Buzz!: The Maha Quiz three new rounds have been added besides some old favorites, with the final round refurbished to make the game competitive right upto the end.

Priced at Rs. 1,499 in the Indian market, Buzz!: The Maha Quiz incorporates exciting new game features such as a professional TV-style presentation and a studio at-its-most technically advanced. Additionally there’s a fully-implemented 5-8 player mode, 12 different territory SKU’s, 5000 + brand new general knowledge questions, covering TV, movies, music, sports, science, nature and more along with new pictures, videos and music. There’s also all-new round types, “Mystery Games”, track your stats in the Hall of Fame. You get a choice of choosing from 16 contestants, get to plug in an EyeToy USB Camera and get yourself on the big screen, fine-tune the Buzz! experience with 3 difficulty levels and 3 game lengths and last but not the least enjoy Classic Buzz! game modes: Single Player and Multiplayer, plus Teamplay, Quiz Master and Quickfire Modes.

The venue had a couple of kiosks with plasmas along with the Buzz!: The Maha Quiz game, and we couldn’t let go off an opportunity like this. While my colleague beat me hollow, I wasn’t all that bad after all, scoring the second spot out of four players.

For a fact games like SingStar Bollywood and Buzz!: The Maha Quiz are sure to entice non-gamers to have some fun with the various PlayStation consoles thanks to their not-so-typical themes.