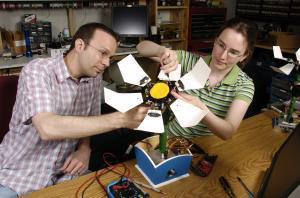 You can now build you very own robot for researchers at the Carnegie Mellon University have developed a new series of robots that are simple enough for just about anyone to build using off-the-shelf parts.

You may think that since anyone can put these parts together and build a robot, it might be a very simple one. On the other hand, these robots once built are sophisticated machines that wirelessly connect to the Internet.

The newly developed robots can take many forms ranging from a three-wheeled model with a mounted camera, to a flower loaded with infrared sensors. You will be able to easily customize these robots.

As these robots can wirelessly connect to the Internet, users can control and monitor their robot’s actions from any Internet-connected computer in the world!

The hardware and instructions needed for building these robots are part of the Telepresence Robot Kit (TeRK) developed by Illah Norbakhsh, associate professor of robotics and team members of his Community Robotics, Education and Technology Empowerment (CREATE) Lab.

It is obvious that Nourbakhsh and his team have aimed to make highly capable robots accessible as well as affordable for college and pre-college students, as well as to those who are generally interested in robots.

At the heart of each TeRK robot is a unique controller called Qwerk that combines a computer with the software/hardware to control the robot’s motors and other devices. Qwerk, developed by the CREATE Lab and Charmed Labs, also connects the robot automatically and wirelessly to the Internet so it can be controlled by any Internet-connected computer.

“The Internet connection means the robots are much more global,” Nourbakhsh said. Not only can the robot be operated remotely at any location with a wireless Internet connection, but it can also send photos or video, respond to RSS feeds, or access the Internet to find information. That combination opens a wide range of possibilities. “We’re hoping people notice that the sky’s the limit,” he added.

“Once people have followed a recipe and become acquainted with robots, they can build on their experience,” said Emily Hamner, a senior research associate in the CREATE Lab. “Not only can they customize the recipes to their liking, they can also design new robot types using the Qwerk controller.”

Qwerk is a Linux-based computer that features a field programmable gate array (FPGA) to control motors, servos, cameras, amplifiers and other devices. It also connects with USB-based peripheral devices, such as Web cameras and GPS receivers.

“We leveraged several low-cost, yet high-performance components that were originally developed for the consumer electronics industry when we designed Qwerk,” said Rich LeGrand, president of Charmed Labs. “The result is a cost-effective robot controller with impressive capabilities.”