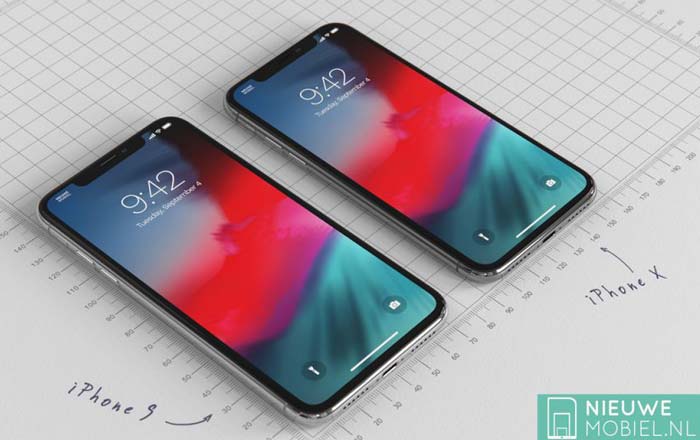 There have been a ton of leaks and rumors about the next crop of iPhones, painting a pretty vivid picture of what’s to come. Here to bring this speculation to life are a couple of high-quality renders made by concept phone designer Jonas Dähnert and shared by NieuweMobiel.

The images focus on the 5.8-inch OLED iPhone X (2018) and 6.1-inch LCD iPhone, popularly referred to as the budget iPhone X. It’s easy to make out the differences between the two. For one, the entry-level iPhone is much bigger. It also features a very prominent single camera at the back instead of the dual cameras favored by its smaller cousin.

Apple is apparently using aluminum for the 6.1-inch iPhone’s frame to cut down on costs, reserving its premium stainless steel frame for the iPhone X and iPhone X Plus. Then there’s the device’s LCD screen. LCD panels are a lot cheaper to produce than OLED ones.

That doesn’t mean they don’t come with their own set of problems though. Word on the street is that Apple is facing difficulties placing the Face ID array and notch design on the LCD display for the first time. The chin is supposed to be a bit more prominent since LCD screens don’t bend as well as OLED, making it harder for Apple to hide the border at the bottom.

The render suggests that Apple will stick with a glass back for the budget iPhone X. This will probably make way for wireless charging, unless it’s one of those things the company wants to scale back on like 3D Touch. The good news is that the device will probably come bundled with an 18W USB-C fast charger.

Also See: 2018 iPhone pops up on Geekbench with 4GB RAM

We’ll find out if these images are accurate come September. Other than 3 new iPhones, Apple will also probably launch the Apple Watch 4 and roll out iOS 12.