Bubble Bobble Plus! and Rainbow Islands: Towering Adventure! For WiiWare 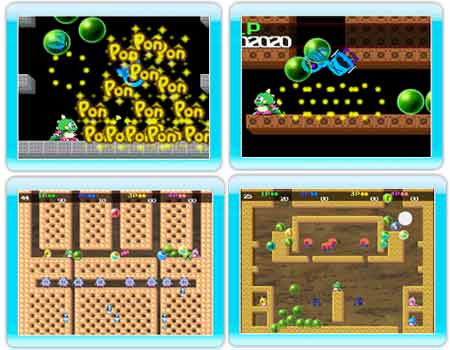 Bubble Bobble Plus! and Rainbow Islands: Towering Adventure!, both from the series of Bubble Bobble from Taito will be available for download on April 10, 2009 and in May 2009 respectively.

Bubble Bobble is a series of arcade game that originally debuted in 1986. It offers classic action and four-player multiplayer mode. There are 400 challenging rounds in different game modes to have fun with plus a global ranking system. Later in 1987, the Rainbow Islands was rolled out.

The series has two lead characters – Bubby and Bobby, the twin Bubble Dragons, who in the Bubble Bobble Plus! journey together through the Cave of Monsters to rescue their girlfriends! Players will have to push and burst bubble and dodge enemies and defeat the final boss. There are 200 rounds in Standard Mode and Super Standard Mode, consisting of all new maps. There are the Arrange Mode and Super Arrange Mode with 200 rounds and two downloadable Expert Modes as add-on content consisting of 100 extra rounds.

In this game, players get 7 Areas in Story Mode, Challenge Mode, Time Attack Mode and a full range of Rainbow magic to take advantage of.